Home » Bondage F/F » Poor Sahrye finds herself tied up and gagged at sun down on the back of the boat. Sahrye & JJ bondage 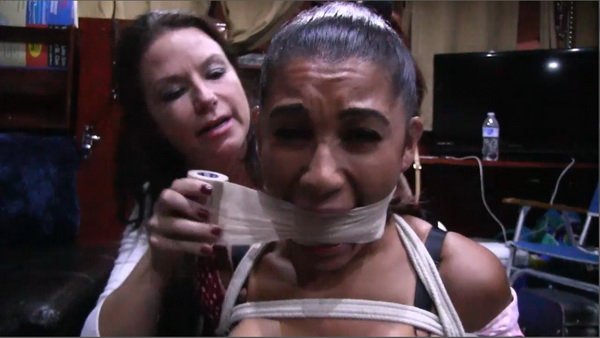 Poor Sahrye finds herself tied up and gagged at sun down on the back of the boat. She struggles around and pleads for help with her big eyes but she is just ignored. Eventually she is taken into the cabin. She is tied up even more and groped by both of the people below deck. They are talking about things she didn’t think existed in real life like human trafficking and she is the unlucky human. She manages to get her cellphone out but she is just caught. Her gag is removed and a huge pair of panties that could fit 3 of the cute girl into them are stuffed in her mouth. Her head is wrapped tightly with vetwrap. She is manhandled and struggles around until it is time to hogtie her. She is hogtied and then a stocking put over her head and pulled back. Poor little thing she is outta luck for sure.