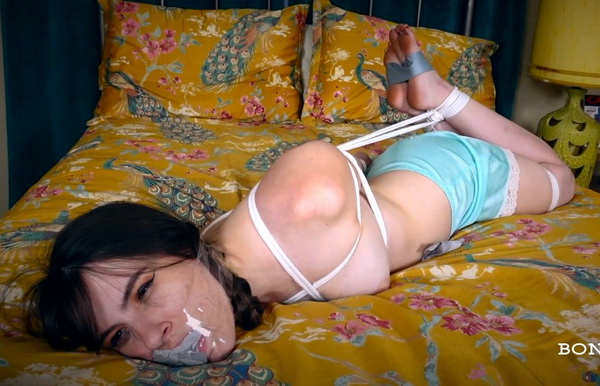 Ziva is laying on the couch barefoot, when a burglar (Nyxon) comes up behind her & covers her mouth. The two ladies wrestle for a moment before Nyxon drags her away. The next scene has Ziva taped to a chair, blindfolded & a wash cloth packed into her mouth & sealed in with several strips of clear tape. After she attempts to make some noise, Nyxon enters the room & removes the gag & blindfold while questioning her about her valuables. Ziva resists, prompting the burglar to begin tormenting her by packing her cheeks tightly with several pairs of socks. Nyxon takes her time with it, and just as Ziva is about to choke, she ties a white cleave gag around her head plus a red cloth OTM gag to make sure that everything stays in place. Ziva struggles with the gags for a few minutes, then Nyxon returns, removes the gags & mouth stuffing & Ziva tells her that she’s willing to talk.
The next scene opens up with Ziva topless & hogtied on the bed with her feet taped with duct tape. Nyxon crawls on top of her, stuffs her mouth again with some dirty socks, then wraps a clear tapegag around her head to seal them inside her mouth. Nyxon then leaves Ziva to struggle while she loots her house of all of her valuables. When she’s finished, Nyxon walks back into the room & places her hands over Ziva’s gagged mouth until she stops struggling. Once Ziva goes quiet, Nyxon removes the tapegag & mouth stuffing before leaving the house. 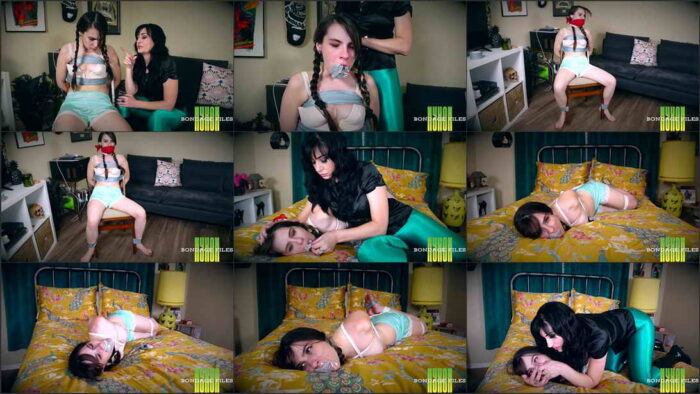