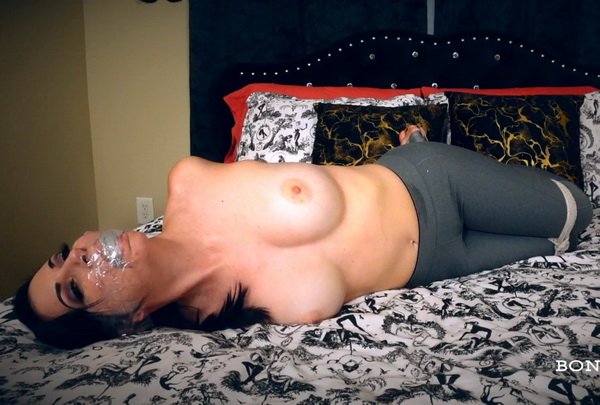 Nyxon is laying on the couch barefoot, when a burglar (GiGi) comes up behind her & covers her mouth. She wrestles Nyxon to the floor, then drags her off. The next scene opens up with Nyxon taped to a chair, stripped to her bra, blindfolded & gagged with a large washcloth & several strips of clear tape. She attempts to make some noise, and GiGi enters the room. She removes the gag & blindfold & questions Nyxon about her valuables. Nyxon resists, prompting GiGi to return with a large number of socks. GiGi starts packingin Nyxon’s cheeks tightly with the socks, then tightly ties a white cleave gag in her mouth with a red OTM gag. After struggling with the gag for a bit, Nyxon tries to signal her captor. GiGi removes the gag & the stuffing, and Nyxon gasps & says that she’s ready to talk. The scene cuts to Nyxon hogtied on the bed, topless with her feet taped together. GiGi tells her that they’re going to have to keep her out of the way more permanently & returns with some dirty socks from her laundry. Nyxon complains about the dirty socks, but to no avail. GiGi stuffs Nyxon’s cheeks until they’re ready to burst & wraps clear tape around her head to make sure that the stuffing doesn’t fall out. 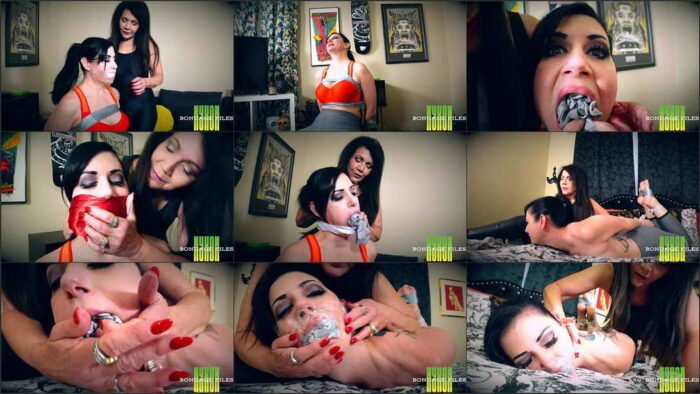