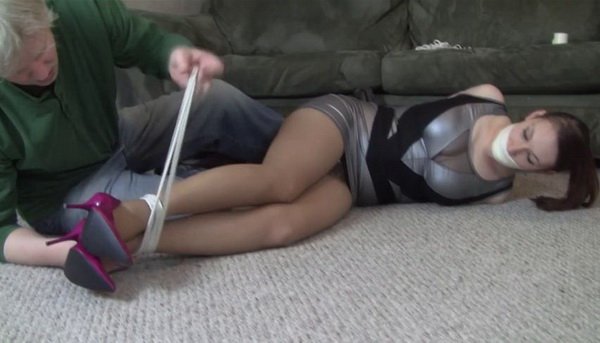 Ariel was really wanting David to tie her up and she’d dressed in a sexy silver dress and high heels and even gone so far as to stash some rope in the couch. After a bit of playfulness David finds the rope and agrees to bind Ariel tightly. Starting with her wrists she soon finds herself getting increasingly helpless. Elbows follow and soon Ariel is gagged with a purple cloth and white microfoam wrapped repeatedly around her head. She finds herself on the floor next where her ankles are bound and her skirt hiked up to show her panties off. David leaves her to get more rope and returns to find Ariel still struggling on the floor just where he left her. David returns and adds a sinister hair bondage to her bondage creating a strict hogtie. A bit of toying with her and rolling her around to grope her and David then takes his leave of her leaving her tightly bound and gagged on the floor wondering when he’ll return and untie her. Rope Bondage Constance, Her Target Gets the Drop On Her