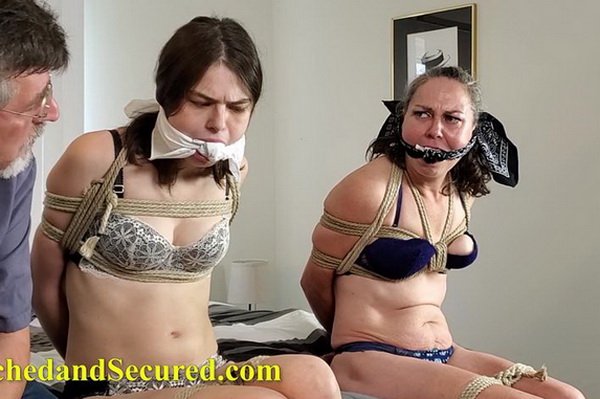 Genevieve has been the subject of intense pressure to sell her ancestral home. A local real estate developer has big plans for the land it rests on, and has sent a representative to make one last offer. Unfortunately for him, Genevieve and her daughter Jeanette have no intention of selling, as the home was built by Jeanette’s great grandfather, and means too much for them. Unfortunately for the two girls, the agent is not about to take no for answer, and puts the girls through an awful ordeal of bondage and gags to “convince” them. Made to strip to bra and panties, the beautiful ladies are bound tightly on their bed, their mouth packed with cloth, gagged with a tightly knotted cleave gag, and finally silenced with the biggest, fattest OTM gag they’ve ever seen! It’s so thick it almost seems like an inner-tube has been plastered to their terrified faces! Just then, a knock comes on the door and the agent leaves the girls alone so he can get rid of the unwanted intruder. The girls scream through the gags, but the massive silencers are far too effective, and the neighbor never suspects a thing. Desperately, the pair struggle to untie themselves, but they don’t get far before the agent returns and decides to take care of the troublesome duo once and for all! 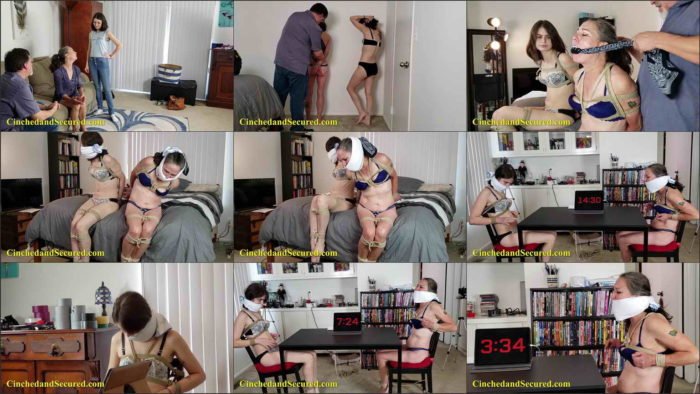 Jeanette Cerceau Cinched and Secured – Stop Looking At My Panties!