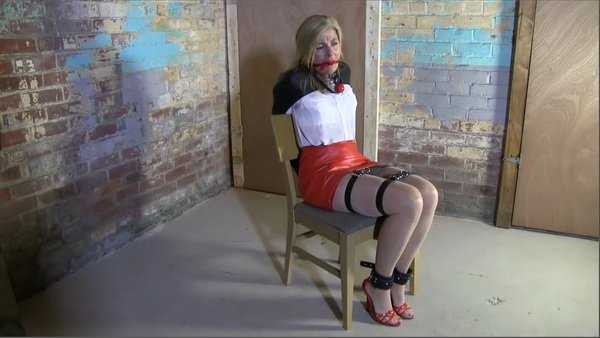 Dakkota stands in tall heals, a leather skirt, armbinder and ballgag tethered to a short post. She is the captive of a woman that doesn’t even say a word to her. The woman appears and motions to her to spin in circles and then to stand against a wall. Very tight microfoam tape it put over the womans ballgag. Then she is instructed to sit. The woman adds some straps to her so she can’t get out of the chair. She removes the gag and the woman pleads for her captor to let her free and reminds her that her family needed her at home but she is ignored. A gag of red stockings, knotted in the middle between her teeth. The pretty woman drools on herself as she is strapped up more. Then that gag is removed and panties stuffed in her mouth with more tight microfoam. The woman leaves and after some time returns with a scary leather mask. She puts the hood on the woman while wearing an enormous ballgag herself. She pets Dakkota, drools on her a bit and leaves her there strapped the chair. Is she Demented – demented girl