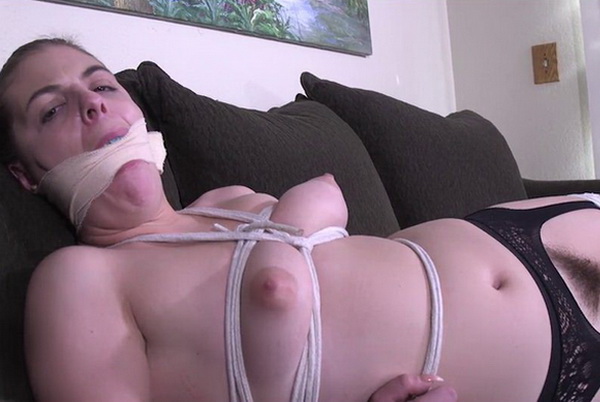 Kendra is the older girl next door. Today she has invited him over, telling him that she had a surprise for him. When he got there, she was on the sofa covered with a bed sheet. She told him that she needed his help and started to pull the bed sheet off. When she was uncovered, she was only wearing a pair of crotch less pantyhose. No panties and no bra. But what was really surprising was, her legs were tied with rope. Kendra brought out some more rope and told him that she needed help tying herself up because she could not tie her own hands behind her back. He was happy to help her and soon he had Kendra bound and gagged. As she struggled, Kendra made sure he got a good view of her boobs and her hairy pussy. She made sure that he understood being tied up like this made her very horny. But if that wasn’t enough, Kendra slid off the sofa and bent over. She made it perfectly clear that she wanted him to fuck her doggie style while she was tied helpless.