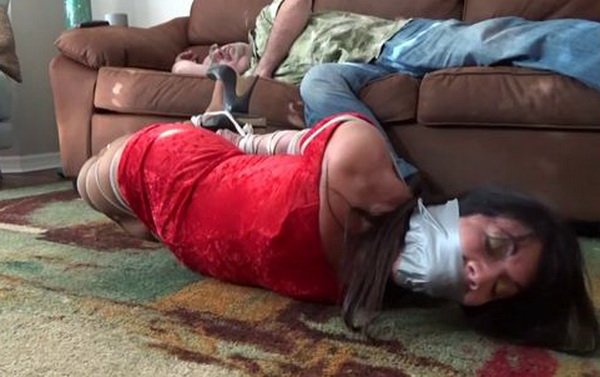 It’s a boring Sunday afternoon. My husband has gone to a football game and I don’t know what to do with myself. Suddenly I have an idea: a bondage game!! I lay out lots of rope and sit on the couch waiting for my husband. When he gets home I suggest to play a bondage game just like we did when we were younger, but in a much more tough way. I see that he is very angry and aggitated because his team lost, but he agrees and hopes tying me super tightly will calm his nerves. He places me on the floor and painfully ties my arms together from fused elbows to wrists with alot of rope and after finishing it, he adds even more rope! I cry out and beg him saying that this is unbearable and this cruel bondage isn’t what I had in mind. He has a crazy look in his eye and ignores my pleas. He continues tying my legs with more and more rope from my thighs to my upper knees to my lower knees and down to my crossed ankles, while I cry in total pain and frustration. He joins my bound wrists to my ankles and when they touch I faint. One hung one hogtied, tied elbows