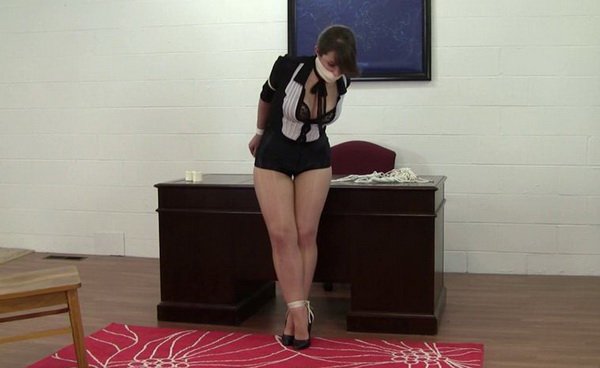 Elizabeth is called into Mr Big Boss’s office for her attire. It’s not that he disapproves, it’s more that the mail boy had issues concentrating and followed her all over the building just tossing random envelopes into random offices anywhere he went all in order to stay near her and her tight, short, disco shorts. The solution to the problem naturally is bondage, specifically binding and gagging Lizz to keep the mail boy on task until he’s straightened out all the earlier mess ups. First her wrists, and then her elbows are bound and Mr Big boss takes two large red cloths and shoves one each into her cheeks sealing them in with tightly wound microfoam tape. With her arms bound and her mouth gagged he gets on the ground and bound her ankles tightly together crossed over each other forcing her to stand in a very precarious position but displaying her legs and pantyhose so well. He has some business call him away from her and he leaves her to struggle standing in front of his desk and on display. She rotates a bit and tests her mobility despite her legs quivering with effort…