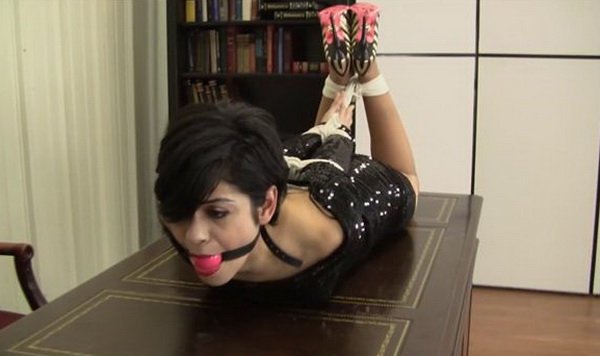 Elizabeth and Johannie are on their way to a gala, but Elizabeth wants some alone time and has commandeered Mr Big Boss’s office for a bit of bondage fun between the two ladies. Elizabeth gets her to agree to it and starts grabbing some rope and binding her wrists tightly together. Moving on Elizabeth grabs some rope and binds Johannie’s ankles together before forcing her to wiggle around a bit and show off her assets. Another rope is added above her elbows binding them tightly together and pushing her sequin covered chest stuck out. With the rope added Lizz takes a pink ballgag and shoves it in Johannie’s mouth gagging her effectively. After placing her on the desk Lizz takes her leave letting Johannie wiggle and struggle in her tight ropes. Eventually Lizz returns and rolls Johannie over onto her stomach taking a final rope and hogtying her tightly with it. Lizz reveals after Johannie is bound and gagged that she’s really just concerned with how close her and Mr Big Boss were getting and that this was all a ploy to get her out of the way while Lizz went to the big company gala. Johannie moans and immediately is angered by her predicament but finally just decides to relax, make the best of the situation, and enjoy her bondage and gag.