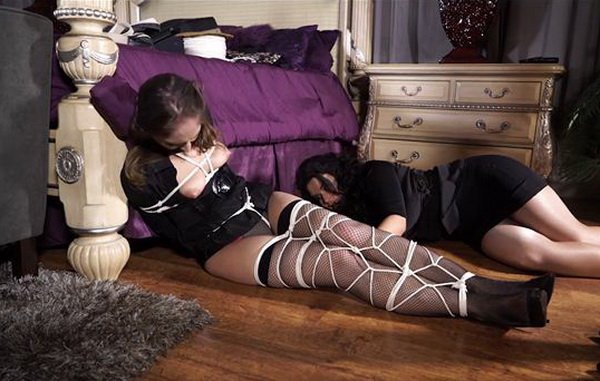 An eager novice private detective named Rachel has been following leads on a woman that has been robbing hotel rooms. She follows her into one. She is just so pleased with herself. She checks in the womans bag and sees a lot of rope. She decides that it will be fun to tie her up before the police come. The criminal doesn’t fight back, she only tries to bribe her because she knows that she has back up yielding a gun coming soon. More ropes go on and her mouth gets stuffed with panties with vetwrap. She starts to worry that maybe back up isn’t coming afterall. She is hogtied and the detective seems very pleased with herself. She gloats. Much to her dismay another woman comes in with a gun. She forces the detective to untie her partner. She gets frisked and felt up. For pay back she is tied up, gagged,taunted, humiliated. Eventually she is left in a ball on the floor for a maid to find or the people staying in that room. Female bondage, mouth stuffing, Do as I say or never see your daughter again