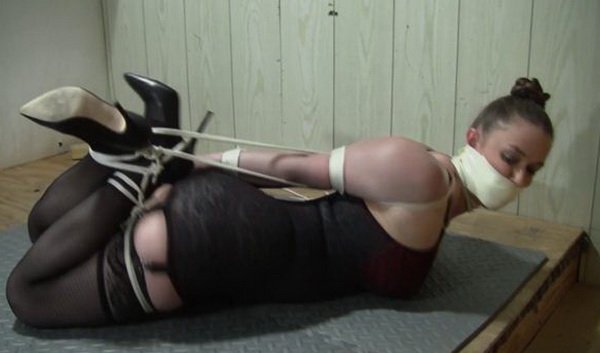 Pepper got to work and immediately had a note on her desk telling her to report to the warehouse where she was told to strip down from her secretary garb into her girdle and stockings. After putting her clothes away Mr Big Boss quickly gets to work binding and gagging her for some of the typing errors that she’s made over the last few weeks. He tells her about a little cell that they have and that she’ll be undergoing some isolation training. Pepper soon finds her arms completely bound elbow and wrist and her mouth packed with a large red cloth which is summarily held in by microfoam tape wrapped multiple times around her head. Mr Big Boss gets called away during his bondage and leashes her off to a pole leaving her to struggle and sexily move against the pole. Mr Big Boss finally returns and unleashes her from the pole leading her up to the small room at the top of the staircase. She’s bound in a tight frogtie before being leashed off to an eyebolt and left in the room with the thump of the door of the cell closing on her bound form. Pepper struggles and moans remembering to put on a good show and hoping that she won’t have to endure too much of this before she’s allowed out of the tiny room.