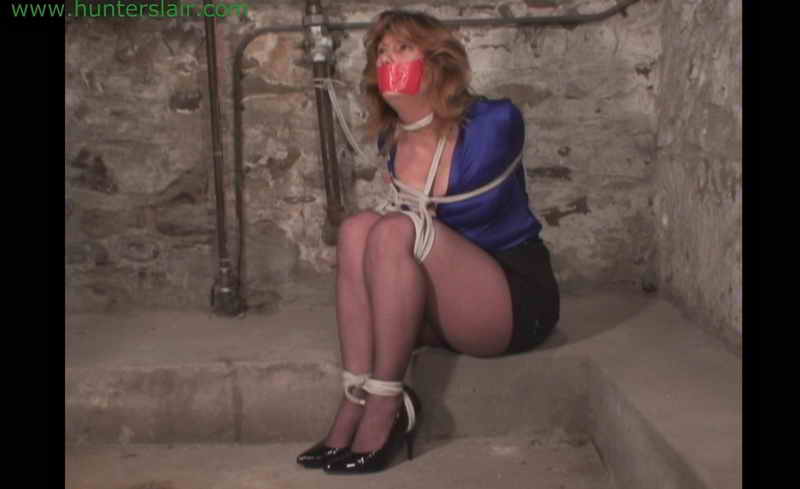 Hot blonde MILF Dahlia sits in the Hunter’s basement with her wrists tightly bound behind her back and tethered to the pipes by a rope around her neck. Her mouth is pack and sealed shut with strips of shiny red tape. Dahlia has lost all track of time being left bound and gagged down in the dank cellar. She hadn’t heard any noise from upstairs in some time so assumed she was left alone. Dahlia looks up at the rope tied to the pipes and decides that she isn’t going to wait any longer. She struggles to her feet and reaches around with her bound hands to try to untie the knots holding her to the pipes. She stretches out her numb fingers and begins to pick at the knots. But the knots are too tightly tied she can’t work them free. Then she hears someone coming down the stairs and turns to see the Hunter come down. He has her sit and grabs her curvy legs and tightly binds her ankles and knees tightly together. Then he grabs more rope and ties Dahlia’s elbows tightly together behind her back. Dahlia grunts and moans as she feels her elbows touch behind her back. He then gets more rope and pushed her chest to her knees he wraps the long rope around her shoulders, back and under her knees to tie the pretty blonde in a tight little ball. He leaves the wench helplessly bound and gagged for her own good, there will be no further escape attempts tonight. 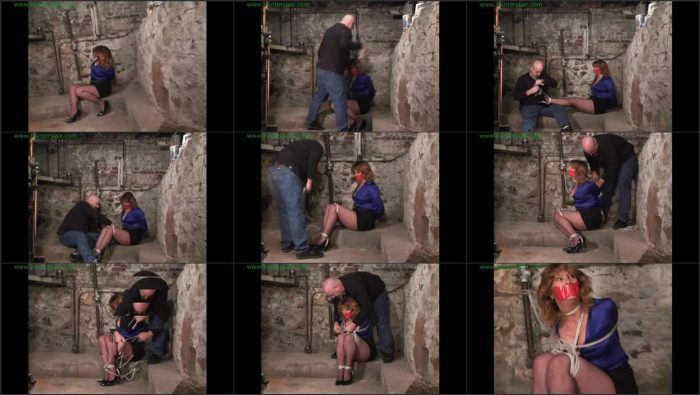 JJ Plush – She back for tight breast bondage, jimhunterslair