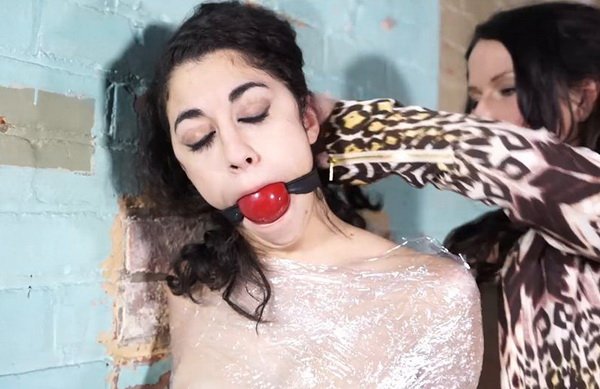 Simone is still being held captive by an older woman that became obsessed with her. She is getting a little paranoid that the cops are on her trail. She has sold her building and plans to move to Toronto where she gets to house sit for a while. She won’t have to work at all. She can just hang out with Simone! Well Simone struggles bound and gagged to a chair and manages to get free. She couldn’t make it out, she was met by JJ who is excited about her new dark hairdo and the big move to Toronto. She just needs to pack their things. She can’t let Simone escape while she packs so she decides to mummify her but first she gets an over the knee spanking and a good talking to. She is wrapped in saran wrap while ballgagged. Then she is tape up with black tape, she gets a stuffing gag, nylon cap and plenty of tape, then the tiny thing is laid down on the ground to finish her off. She certainly won’t be able to escape! She can’t even roll over. Next stop Toronto!!! Mummification pretty woman all wrapped up in plastic and taped up…

Rachel Adams mummification bondage, I know how to warm you up