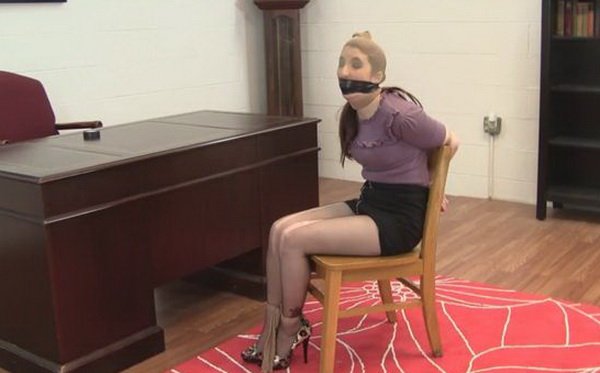 Gianna Love is having a bad morning. One thing after another has gone wrong. And worst of all. her black pantyhose are ripped. It’s a very unprofessional look and Mr. Big Boss is not pleased. When Gianna is called into his office she stammers over excuses. Mr. Big Boss isn’t going to put up with her excuses. On his desk is a pile of nude and suntan pantyhose. He grabs a pair and binds her wrists with them. He stuffs another pair in her mouth, covers her head with another pair and then wraps electrical tape around her mouth. Her excuses are now muffled. Mr. Big Boss has Gianna bend over the desk, showing off her ass and legs, while he binds her ankles together with another pair of hose. She is left to struggle for a moment before being placed into a chair where her elbows are cinched behind her back and her ankles are secured to the chair. Gianna is left bound to the chair with hosiery while Mr, Big Boss works on other issues. She struggles against her silky bonds, thinking that her day could have gone a lot better. It’s a manic Monday, after all. Stefania Mafra, You wont think this is so fun when I stuff a gag in your mouth

[gndbondage] Tie us up so we can rub each other in our pantyhose! HD [AJ Marion, Madalynn Raye]