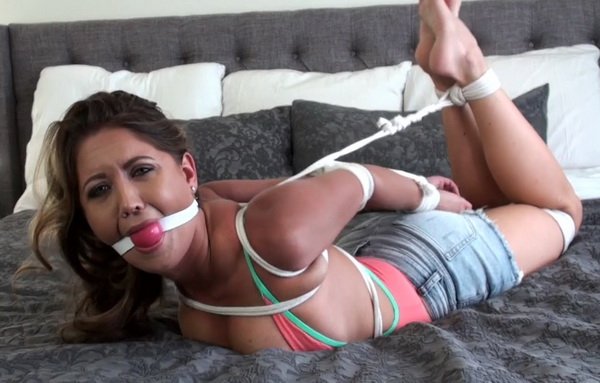 Chrissy was enjoying a relaxing day alone at the beach when her phone died so she couldn’t order an uber to get home. She started walking back to her house but it’s so far she figured why not try to hitchhike and see if anyone will give her a ride. It didn’t take long for a man to notice her walking in her skimpy swimsuit and daisy dukes. He pulls up next to her and offers to give her a ride. She doesn’t think twice and hops in his car. She gives him directions to her place that’s only a few miles away, unaware that the man is a bondage loving maniac that has other plans! He told her they just had to make a quick stop but next thing she knows she wakes up tightly hogtied in a strange room that she doesn’t recognize with no idea how she got there! Then the man appears and Chrissy remembers that’s the man who was going to drive her home! He shoves a ballgag in her mouth before she can get too loud and taunts her about being a silly girl for hitchhiking and getting into a stranger’s car! He exposes and fondles her big boobs that were already barely covered by her skimpy swimsuit as she struggles and protests through her gag. Then the man tells her he has a few things to take care of and will be back for more. Chrissy is left to struggle and roll around on the bed, desperately trying to get free before the man returns. After several minutes she starts to realize there is no chance of escaping from the tight ropes. She’s totally helpless and worries what else her captor is going to do to her when he returns! 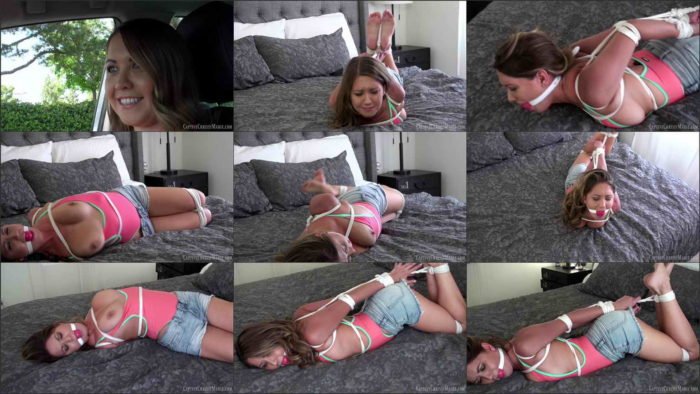