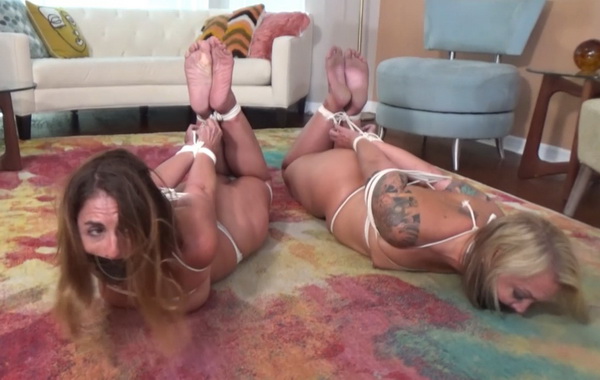 Roommates Carissa Dumond and Kelli Curtis are relaxing in bed after a long day. Kelli decides to get a snack and as she leaves the bedroom she’s grabbed by a burly man (Maladosteo). He roughly strips off her nightgown and thong leaving her naked. He shoves her down onto a chair and begins to tie her up. The next thing she knows she’s tightly tied in the chair and her mouth’s been packed and sealed up with many layers of thick electrical tape. Kelli struggles and sobs in fear because she knows he is waiting for Carissa to come looking for her. As Carissa walks out of the bedroom he ambushes her. She’s caught totally by surprise and is before she realizes Kelli is bound and gagged the thug has her down on the ground stripping her. Carissa fights but she’s no match for the strong ambush. Now both MILFs are hogtied and gagged struggling helplessly on the floor. They are desperate to escape but the bondage is much too tight. They roll and wiggle then attempt to pick at the knots but their efforts are futile. The roommates look at each other in fear and desperation – all that escapes their gags are anguished moans as they helplessly struggle and sob. 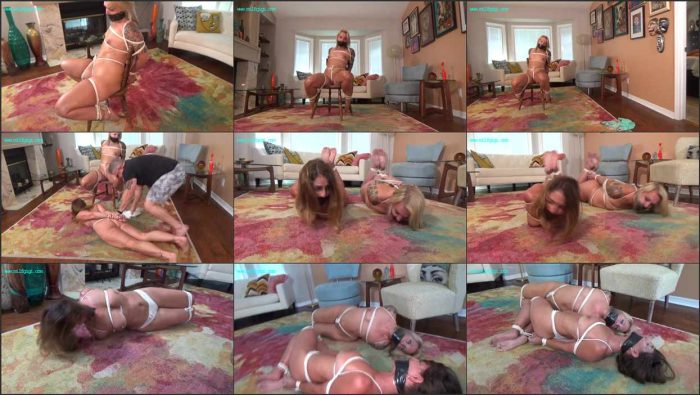