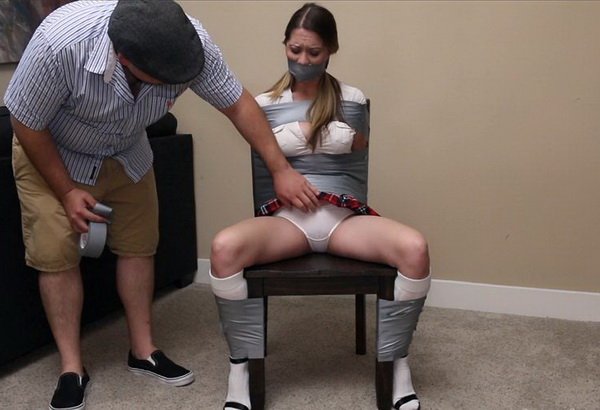 Chrissy has been tardy to her morning class on multiple occasions and her teacher has just about had enough! He has sent her to detention several times and it doesn’t seem to be getting her to change her behavior. He has called her in after school to lecture her yet again about her tardiness. As she sits there rolling her eyes and disrespecting him he also notices her high heels which are definitely not in accordance with the dress code! Chrissy obviously doesn’t care though, all that matters is that she looks good! He tells her that now she is going to have to stay an additional hour with him for breaking yet another rule, but Chrissy isn’t very happy to hear that! She gets up to leave when he pulls out a roll of tape. Guess he is going to have to do this the hard way! He has the perfect punishment in mind for the bratty schoolgirl to make sure she won’t be going anywhere and will be stuck there until she finally learns her lesson! Shiny Bound and Wrap Around Gag Slut For Sale