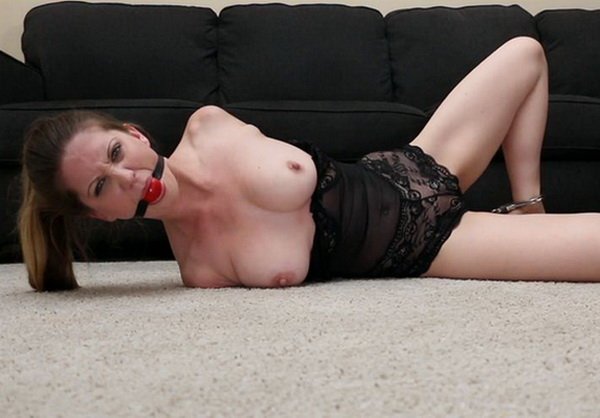 Chrissy is doing a very sexy photoshoot wearing sheer black lingerie and high heels while hog cuffed & ballgagged! The shoot is going along just great until the photographer gets an emergency phone call and has to leave right away! He leaves Chrissy there telling her he has to go and throwing her a set of keys to get herself out of the handcuffs and shackles. She gag talks desperately trying to tell him not to leave her like this, it only takes a minute for him to help her out, but he is gone before she knows it. She manages to struggle her way to the floor to grab the set of keys. That’s when she realizes her predicament is only beginning! Turns out he threw her the wrong set of keys! She desperately tries to free herself from the tight cuffs and shackles, but she soon realizes she is really stuck and has no chance of getting free without the right key! [captivechrissymarie] Bound By My Disgruntled Girlfriend [drooling, gagged, tied up]