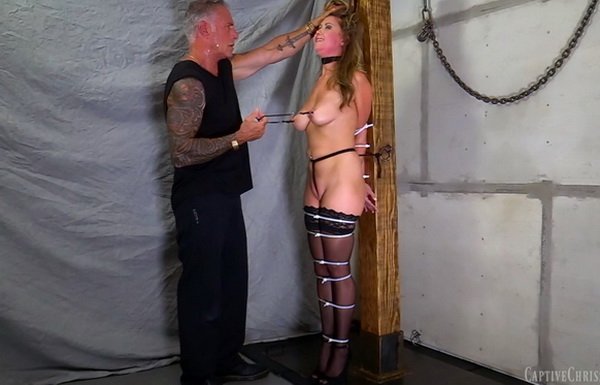 Chrissy walks into the dungeon dressed in a shiny black skirt, black bra, black thigh high stockings and high heels. She is grabbed by the hair and her breasts are groped as she is scolded by her Master for being a disobedient slut. He then starts slapping her face until it begins to show some marks. He forcefully removes her bra and then continues to slap her as she apologizes and pleads with him to stop but there is no chance he is letting her off easy. She needs some hard punishment to ensure she learns her lesson! He proceeds to tightly zip tie her arms with her wrists crossed and elbows painfully welded together. She tries to resist which earns her more face slapping. Then her skirt and thong are removed and he ties a neck rope and crotch rope that get connected to the bondage post to restrain her in place as her legs are tightly bound with six more zip ties. Next he takes the evil clover clamps and attaches them to her nipples making sure to pull on the chain throughout her punishment to torment her even more. The hard face slapping and hair pulling continues until she begins to cry and promises to be a better slave. At the end Chrissy is untied from the post and the zip ties are removed. She is ordered to get down on her knees in first position and the camera pans to see the marks on her tear streaked face and the indentations on her arms from the zip ties. He tells her to put her head down on the floor where she will remain until he decides he is ready for her to serve him again. 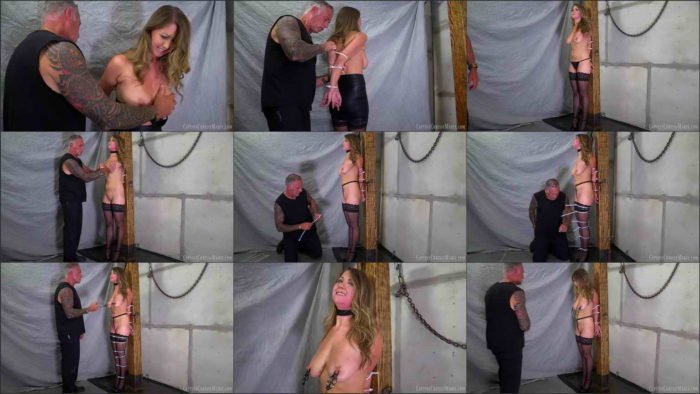 Chrissy Marie Hogtied – His Secretary Has A Secret