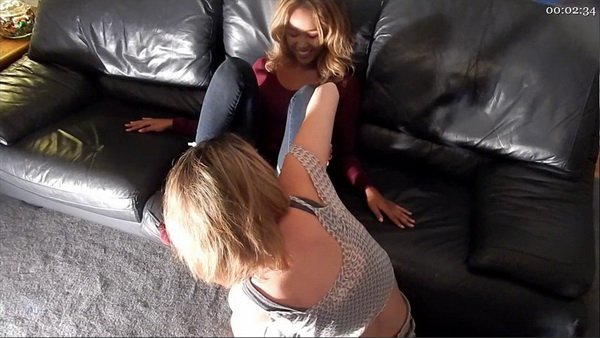 Diamond arrives at my shoot expecting it to be easy, and not realizing what I had in store for her when she arrives. We do some fetish clips, but then I tell her it’s time to turn up a bit on the busty bitch. Poor Diamond has no idea that she’s about to be tied up with some seriously brutal zip ties. These are nothing to play around with, and not for the weak of heart. Diamond doesn’t like the idea of being bound, but when I show her what I am about to use on her to bind her she gets even more terrified. She has never been in bondage before. I ask her some basic questions as I introduce her to Briella Binds Productions. Apparently, the pretty black girl lied about her experience with bondage. She had none. That’s okay though I have no problem breaking new bitches in.. I frogtie her roughly with the cruel, plastic zipties, and then slam her elbows together with another tie. Her eyes get big as the plastic digs into her tender flesh. I ask her how it feels to be completely submissive, and she doesn’t like it. She struggles very good. I add some duct tape into the mix tightening everything up. I tape gag her mouth. Although I alternate between putting my hand over her mouth to shut the bitch up, and her tape gag. Once I have her completely bound I sit back and watch the pretty girl struggle on the couch. She keeps trying to hold herself up, but then she falls all over again. Very hot first ziptie/bondage clip for this 19 year old black beauty [briellasbondageboutique] You can not sleep on my bed, the bitch Lierre should have known better