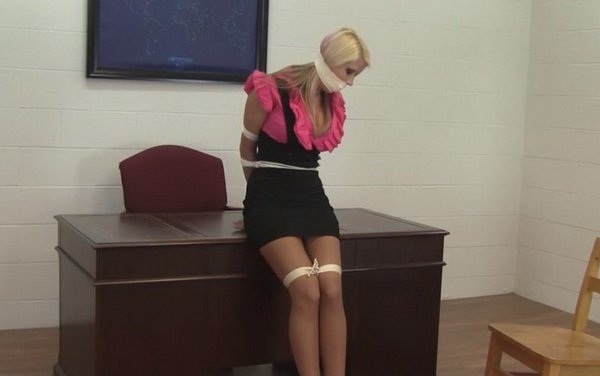 Holly knocks on Mr Big Boss’s door wondering what he could have called her there for. He tells her that she’s messed up the filing yet again and she’s going to have to be tied up for it. She pleads that she’s been sabotaged but stressing the importance of discipline Mr Big Boss tells her that he’s still got to tie her up. Tight ropes encircle her wrists, then ankles starting off her tight bondage by immobilizing her motion near completely. A white cloth is stuffed into her mouth and held there with tightly wrapped microfoam tape. Another rope is wrapped numerous times around her elbows and she actually groans with how tightly he yanks her elbows together. She’s then subjected to a body cinch rope and seated back on the desk while Mr Big Boss grabs more rope and adds it to her legs above her knees. He leaves to investigate her claims of sabotage and Holly wiggles her body in such a way her large breasts heave and wiggle. Finally Mr Big Boss comes back and lifts her in the air placing her on the carpet.