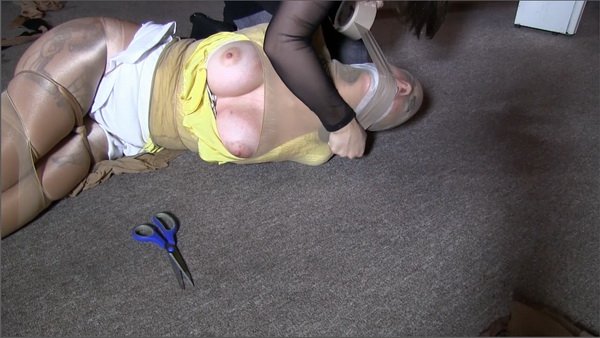 Nyxon is just a hot piece of ass and really not qualified to be quoting big roofing and foundation jobs but she sells a lot dressed in her sexy outfits and shiny pantyhose. She is giving a couple a quote. They run fetish websites and their studio has recently flooded and needs major repairs to make sure it never happens again. Her office calls and tells her that they won’t extend the loan because the pair runs porn sites. Nyxon is snarky and has an attitude and suggest possibly using a credit card or better yet cash but JJ has had the worst year of her life and really can’t take anymore bad news and bitchy women. She signals to Tony to grab her and he does. He puts her down on the floor and JJ grabs a bunch of pantyhose. They tie her wrists off behind the post and use a big pair and pull it over her head. Then they stuff an enormous ballgag in her mouth. They use all of the hose to bind her arms tightly and pull a pair up over her long legs. Her pretty hands and red nails are all that is left exposed. They pull out her beautiful boobs and then finally remove the giant ball. JJ puts a pair of black tights in the womans mouth and then seals it with white tape, after cutting a hole where her mouth is. She gets hogtied with the house on the stinky moldy floor and then tape is put over her eyes so she is completely in the dark, before JJ turns on the big industrial fans and leaves her there moaning while she goes to get some computer work done. Ballgag Strappado Bound In Your Closet

[borntobebound] Her buyer showed up and carried her away. Hogtied brunette Riley

Mom Janira Wolfe Home, Step Brother tied me up so he could look at my panties