Home » General » [borntobebound] Her buyer showed up and carried her away. Hogtied brunette Riley 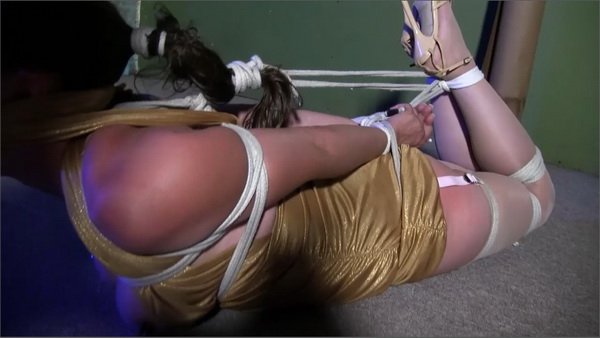 Riley struggles ballgagged and hogtied. Much to her dismay a woman appears and adds rope to her hair, pulling her head back. She takes part of her dress and wraps it tightly around her face. She is left to struggle before a man appears with the woman. He picks her up and the scene ends. She is taken to a new location and forced to hop across the room and then to keep hopping while the pair gropes her. Exhausted she sits in the chair and she is tied up even tighter, including her boobs. She is nipple clamped for the second time. Her mouth is stuffed with a rag and her head is wrapped with microfoam, just to mess with her further a pair of panties is put on her head for a while. The pair gets a telephone call from her potential buyer. The man goes to let him in. He likes what he sees. The woman isn’t done yet. She blindfolds the pretty girl and wraps the remainder of that wrap around her gag as she wimpers. Shortly thereafter her buyer (Eric) comes back in, picks up the chair and takes her away. Tied up GiGi Lynn in the 8 minute escape