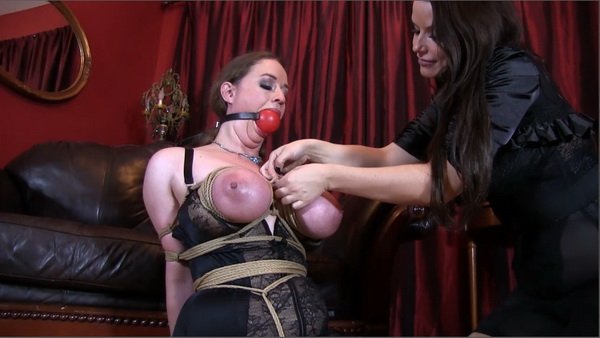 The video begins with two women sitting on the couch. Pepper Sterling has been having marital problems and looking for a little adventure and wanted a woman to tie her up. JJ answered the Craigslist ad. Pepper gags herself with a 3 inch ballgag and her wrists are tied and she is told to stand up in her 6 inch heels and pace around so JJ can get a good luck at her. She gets tied up very tightly, her breasts are tied and she is frogtied. She is regagged with socks and clear tape while more rope is added and then JJ gags herself with the same 3 inch ballgag that Pepper had been wearing as she continues to tie up Pepper. Peppers gag is removed and a shiny stocking cap goes over her head. A hole is cut where her mouth is and a wooden gag is added. She is hogtied tightly. Her hair is pulled back into the gag and her toes are tied in her fully fashioned stockings. She can’t even roll over onto her side. The night doesn’t end as planned for Pepper. The bondager starts to grab her personal items to rob her. She is left there to just hope that her husband comes home from work on time. [borntobebound] She tie & left me gagged with my panties after banging me. Ariyana & JJ Plush bondage video

[borntobebound] Corrupt Security Guard gets to mock with a flexible thief. Tara Tied