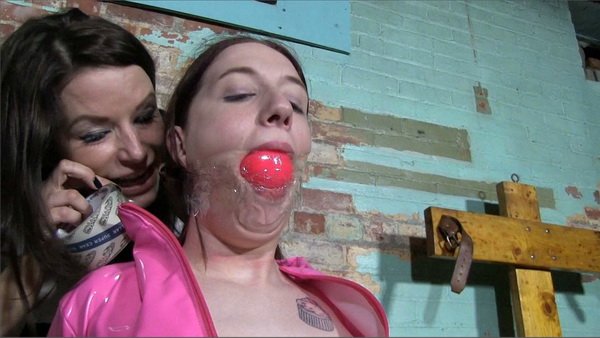 Tara left the studio with a pink pvc dress and heels. She is caught by Tony and discipline. Her elbows and wrists are cuffed. Her legs are shackled, she is put into a chicken wing with chain around her neck and she is put in a cage where she has to crouch because she is too tall for it. The corrupt security guard arrives and takes her out. She unzips the dress and nipple clamps her and makes her bounce up and down and then makes her stand with her head on the wall and then pace around. The scene ends and she takes her to another room where she ties her up. Her elbows are tied, her ballgag is removed and a pink ball is put into her mouth and clear tape wrapped around her head. Her boobs get tied up tightly and then the gag is removed and a huge pair of panties shoved in her mouth, an entire roll of vetwrap around that. She is put on the floor and about to get hogtied when she starts to have trouble with that gag. It is removed and an ace bandage is wrapped tightly around her head, just as brutal but without the possibility of chocking to death. She is hogtied, rolled from side to side. Her hair is tied back into the hogtie and she is nipple clamped again. Lastly a stocking is wrapped around her eyes so she can’t see and she is left like that. [borntobebound] She tie & left me gagged with my panties after banging me. Ariyana & JJ Plush bondage video

[borntobebound] Crystal Frost can’t move much of anything at all [hogtied, gagged]