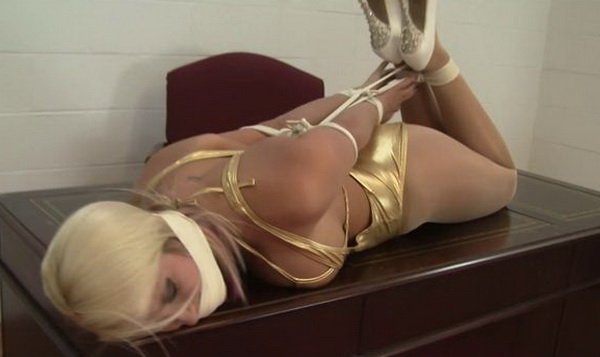 Holly comes into the office of the judge of the swimsuit competition she’s competing in with an agenda. She pulls some money out of her swimsuit top and starts trying to bribe him with it. He’s willing to work with her but money isn’t what he’s interested in. Reaching into his desk he grabs some rope and begins tightly binding her arms behind her back. Taking her lovely tall blonde form in in her shiny gold swimsuit and ultra shiny pantyhose it’s definitely the sort of job he’s very happy to be doing. Grabbing another rope he winds it around her elbows and draws them tightly together. Next he grabs a white cloth and shoves it into her mouth taking some microfoam tape and winding it around her head sealing it in her mouth. Grabbing a chair now that she’s satisfactorily bound at the arms and gagged thoroughly he takes another rope and binds her ankles together pulling her white heels side by side. He heads off after binding her and seating her in the chair and it begins to dawn on Holly that she might have been scammed a bit and she starts struggling in earnest. She tries to reach down off the chair and untie her ankles but she can’t reach and she’s far too scared of falling to take herself down from the chair… Amiee Hogtie with a Mouth Packed Microfoam Gag, First Day at DiD

Paisley Toronto struggle hogtied and gagged – You cannot just barge in here and tie me up!