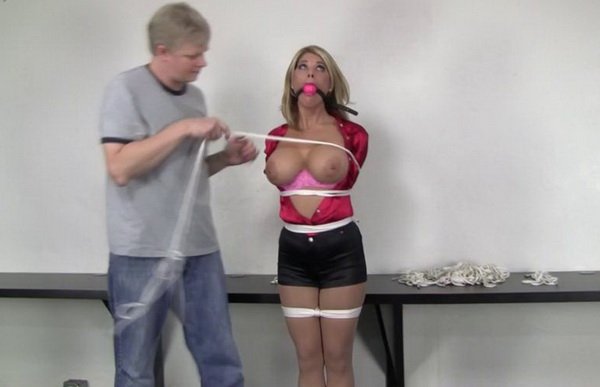 Carissa Montgomery strides into Mr. Big Boss’ office wearing a red shiny shirt and very very short shorts. Mr. Big Boss doesn’t waste any time getting rope onto her upper body. He starts by cinching her elbows tightly together as she wiggles her ass in her tiny shorts. Her breasts threaten to pop the buttons on her blouse as they are thrust forward from arm bondage. With her wrists and elbows welded together, a pink ball gag comes next. Carissa willing parts her pink lips so the Boss can place a pink ball in between them. He straps it on tight as Carissa moans against the ball in her mouth. Carissa enjoys herself while the Boss adds more rope to her body. He starts with a waist cinch rope, pinning her arm her arms down to her back. He then moves to her thighs and ankles, making sure to loop her high heels into the tie so she can’t kick them off in the struggle. Latina Sahrye and Raven – The Rehearsal, Damsel in Distress

Ashly Anderson Bondage by Jon Woods – Captive At The Mansion

Fayth on Fire Stretched out by her wrists & crotch rope for an ass beating, jimhunterslair