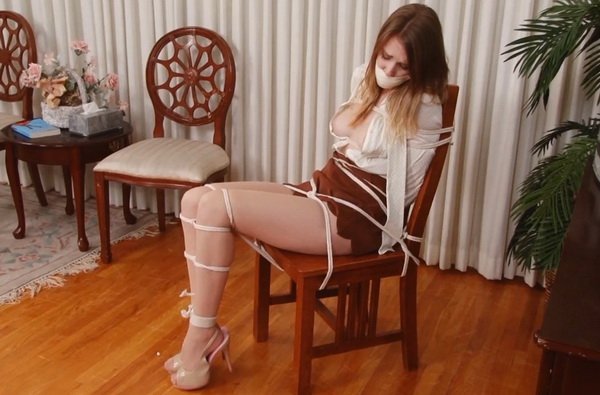 This story begins with a two-part episode of “Action Lady.” In the first segment, the busty crimebuster (Carissa Montgomery, dressed up in secretarial skirt, blouse, pantyhose and strappy heels) is undercover at the offices of the B & G Company, working late on a special assignment. Before she can make her planned rendezvous for the mission, she’s grabbed by the villain known as “The Black Hoodie.” The surprised lady is handgagged, bent over a desk and her hands are promptly tied behind her back. He silences his gorgeous captive with a stuffed cleavegag and then uses a single long piece of rope to secure Action Lady into a snug ball-tie on the floor (all tying and gagging is shown on-screen). The depraved villain bares her considerable breasts before he exits, and the vanquished defender of justice struggles to free herself, but all her efforts are to no avail!
In this second segment of an “Action Lady” story, the titular protagonist (Carissa Montgomery) is called upon to be an honorary “Woman In Black” to stop an alien threat. However, she’s no sooner dressed in her iconic suit when she’s confronted by The Black Hoodie again! The dastardly fiend tells his shapely quarry that he needs her uniform. He makes Carissa ballgag herself, then he compels her to strip naked (shown on-screen). Once the champion of good is completely exposed, she’s frogtied with a powerful vibrator secured between her thighs. The Black Hoodie activates the device before making his exit, and it’s not long until Action Lady surrenders to a helpless orgasm.
The Black Hoodie story continues as the masked villain makes a housecall to the Director of Bureau of National Defense. The Director’s not home, but the intruder is quite surprised to discover Blair Williams, a freelance agent for the Nefarious Masters of Espionage. She tell him she’s the Director’s niece, and the villain is shocked that she would betray her own family member. When we next see the busty blonde she’s hogtied on the bed, her jacket pulled open and her considerable breasts bared. Her short skirt is hiked up to reveal her stocking-tops and garters, and Blair’s been cleavegagged. The gorgeous spy struggles for all she’s worth, but it’s apparent Blair isn’t going to get free.
The Black Hoodie has invaded the home of the absent Director of the Bureau of National Defense. The ski-masked baddie makes his way downstairs, where Agent Ashley Lane is rather inexpertly tied but handcuffed and unable to free herself. The villain enters and removes her cleavegag to find out what happened. The leggy agent confesses that she was playing a game with her charges that got out of hand when they found her cuffs. Ashley quickly assesses that this stranger isn’t going to free her, and the masked villain silences Agent Lane with a stuffed microfoam tape gag. He then uses more rope to secure the luckless sitter to her chair while he continues with his mysterious task. Poor Ashley tries to escape this terrible development, but she remains his prisoner… 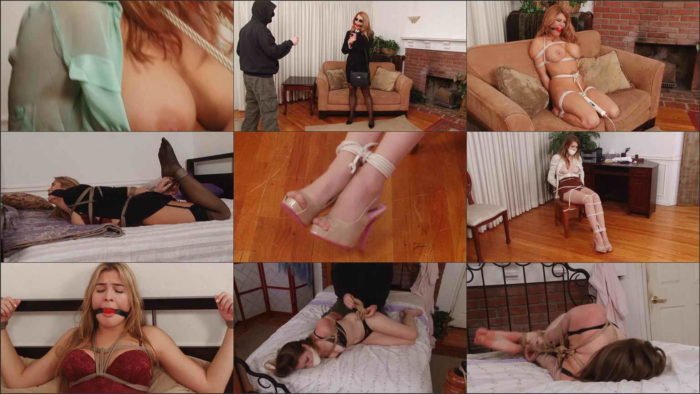