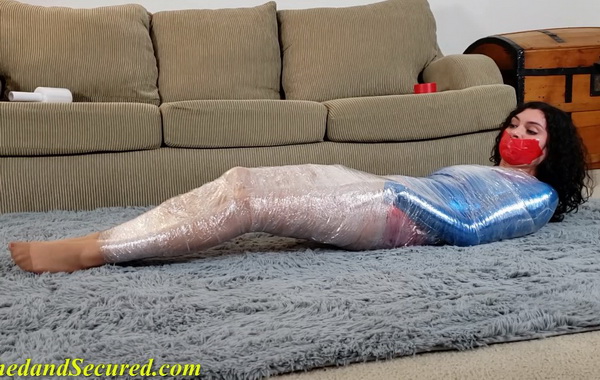 UltraGirl (Bella Luxx) arrives after a tough day of crime fighting, materializing in an energy sphere as she returns from her day’s work. Something about the space seems off, and as she looks around trying to determine why her heightened super senses are on edge, The Collector suddenly materializes behind her! They struggle, his powerful hand clamped over her face as a sweet smelling cloth forces a noxious perfume into her lungs. Soon, she is unable to move a muscle, and The Collector fondles her inert body. He quickly removes her power belt and boots, and leaves her, helpless, in a deep fog as he prepares her for her doom! When the fog lifts and her mind clears, she finds herself mummified from ankles to neck, hands pinned to her sides in a tight clear cocoon of some unbreakable substance! She struggles to free herself to no avail. She ceases in her struggles only when The Collector reappears, gloating as he explains that she is simply the latest Ultragirl to give her belt and boots to a greater cause, but of course, she can’t be left to roam the universe free, lest she stop his plans! The cocoon will keep her helpless and powerless, struggling impotently as the earth faces a crisis of galactic proportions! She protests, only to have her mouth stuffed full until she fears her cheeks will burst, and her mouth is sealed with a special sticky tape of The Collector’s own making. Bonding to her skin on a molecular level, she will never work it free! As The Collector vanishes off to another dimension, Ultra Girl is left struggling, shouting for help and grunting into her fiendish gag! Will she escape? Can The Collector be stopped? Only time will tell!