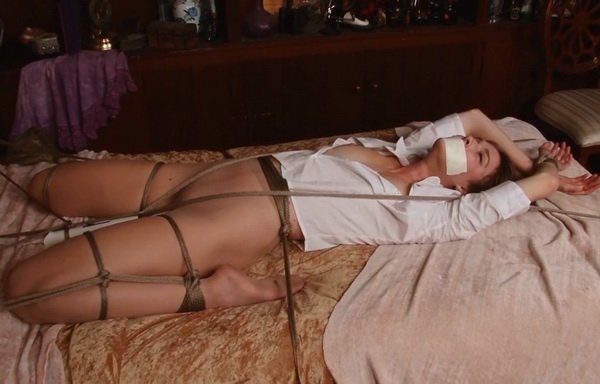 This sensational bondage-packed fantasy is now bargain priced! As “The Upsilon Caper” begins, sexy secretary Phoebe Queen is working late at the offices of the B & G Company when she’s suddenly grabbed by the dangerous enemy agent known only as “The Gray Man.” The petite beauty is shown bound and tapegagged completely on-screen by her silent captor. Phoebe is hogtied on top of her desk, and she struggles in vain to free herself. Before long, the masked villain returns to expose her considerable breasts, hike up her miniskirt and relieve Phoebe of her glasses. Left alone, she continues her helpless struggles, then the bad guy makes one more appearance before he makes his escape and he hops the still bound and gagged Phoebe out with him!
As “The Upsilon Caper” continues, government agent Ashley Lane is assigned to deliver the ransom for Phoebe Queen. She’s standing next to a suspicious-looking van when the door suddenly slides open and she’s handgagged by “The Gray Man,” grabbed and pulled inside. The leggy blonde is bound hand hand foot while the Gray Man claims his prize: a mysterious thumb drive. Left alone, Ashley hops around the van, looking for something to free herself. She gets to the door just as her captor returns, and he hogties the luckless agent. Ashley helplessly struggles, but her ordeal is just beginning.
Government agent Ashley Lane is still held hostage by the mysterious “Gray Man.” The silent villain has spirited the blonde beauty to a hideout for further interrogation. The long-legged babe is ballgagged and tied down to the bed with her arms apart and her ankles crossed and bound. Soon she’s tied spreadeagle, her blouse is opened up, exposing her pert, all natural breasts. Her miniskirt is hiked up for an unobstructed view of her pantyhose, and she struggles in vain against the ropes.
Leggy blonde agent Ashley Lane is still being held captive by the mysterious “Gray Man.” She’s stripped down her blouse and pantyhose, and securely roped down to the bed in a hands-over-head frogtie position. She’s gagged with microfoam tape and soon her silent tormentor activates the vibrator positioned between her thighs. Before long the gorgeous captive surrenders to several powerful orgasms.
To keep the Upsilon research safe, security specialist Britney Amber is enlisted by the B & G Company. The busty beauty is trying to glean information from Phoebe Queen’s laptop when the janitor enters. Britney is shocked to learn he’s actually the corporate spy Vibert! He quickly chair-ties and cleavegags his former confederate so he can search for the coveted research. Before long, Vibert returns to expose Ms. Amber’s considerable breasts before he continues his search. She struggles for all she’s worth, but poor Britney just can’t get free… 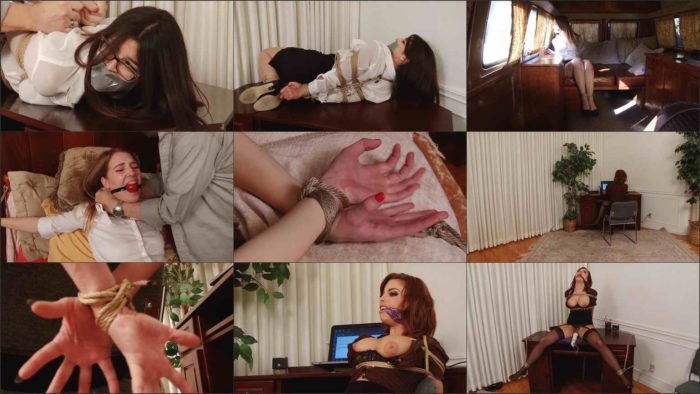