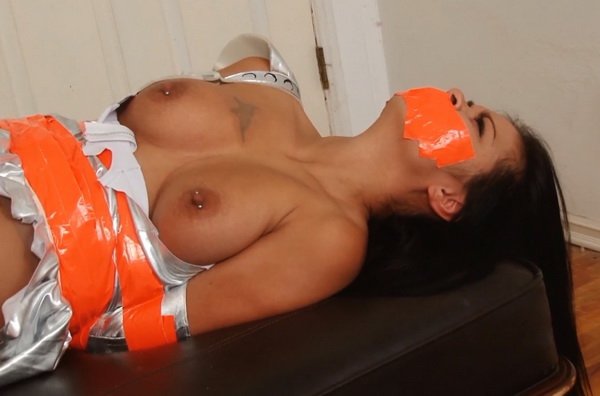 Now you can savor this bondage-filled tale at a bargain price! As this story begins, corporate spy Mary Jane Green is caught breaking into a safe at the B& G Company by her professional rival, Vibert. The veteran criminal has the upper hand, and the leggy brunette is bound on top of a desk for an interrogation. Vibert asks for information on an incident a few nights earlier. He overpowered government agent Amber Michaels working late, investigating “The Upsilon Project.” The villain ties up the busty blonde to get details from her, but learns she knew less about it than he did. Vibert then cleavegags Amber, bares her considerable breasts and leaves her to struggle while he makes his escape.
Mary Jane informs her captor that Amber went searching for a missing agent, and presumably tracked her to the lair of “The Gray Man.” The dangerous enemy agent is lying in wait for Amber and takes her captive. She’s tied down to a bed spreadeagle, ballgagged and compelled to orgasm for his depraved amusement. The gorgeous operative is then tapegagged, tied kneeling hands with her hands overhead and left in a dire situation. Will she be rescued in time?
Vibert then asks Mary Jane about an incident two nights before. He caught a female burglar trying to steal the prototype of the Upsilon radiation emitter. During the office invasion, the burglar’s henchman grabs, hogties and gags secretary Cupcake SinClair to keep her out of the way. Meanwhile the cat-suited cutie has cracked the safe and obtained the top-secret protype. But Vibert binds her to the safe, ballgags her then removes her mask before relieving the burglar of her loot. Mary Jane tells Vibert that the burglar was Jacky Lynn-Wallace, better known as the superheroine “The Queen of Wands.” Using her supernatural abilities, the slender crimebuster follows Amber’s trail to the Gray Man. But the masked villain anticipated her arrival and The Queen of Wands falls into his trap. Using duct tape, the enemy agent binds his powerless prey, gags her and completes her defeat by cutting off her costume and unmasking her. Then stripped down to her panties, Jacky is silenced with a layered gag and bound to a chair with a powerful vibrator roped in place. The evil agent activates the device to further humiliate The Queen of Wands, and she surrenders to a helpless orgasm.
Mary Jane then expects Vibert to provide her with information on her assignment, but instead the corporate villain predictably double-crosses her. The stunning spy is cleavegagged, her luscious breasts are exposed and she’s left to struggle while her nemesis escapes with the coveted information. 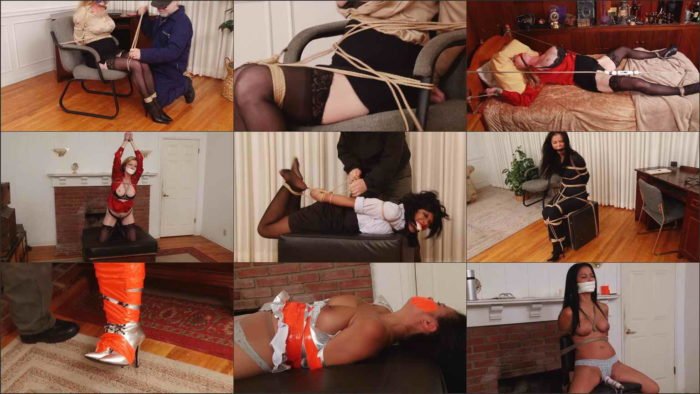