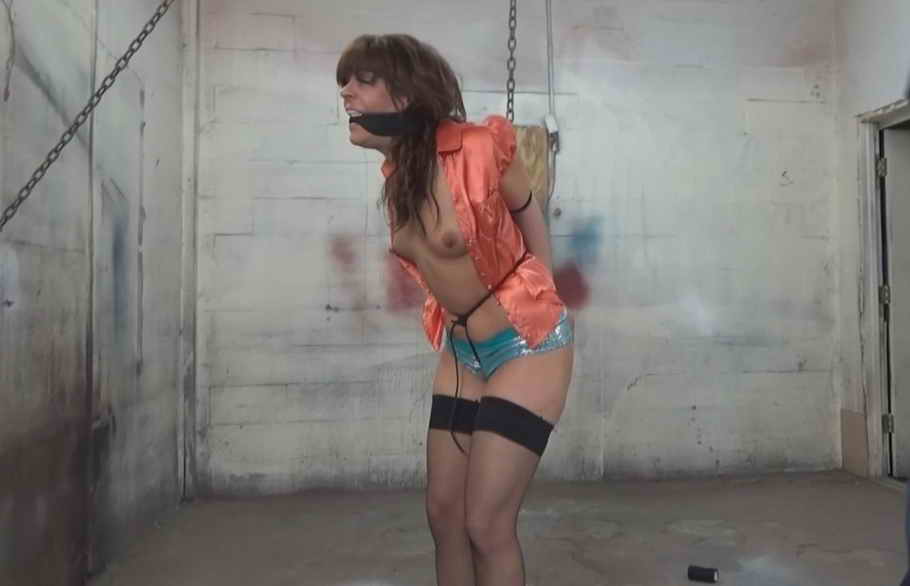 Snitty Annabelle isn’t very happy as the Hunter pushes her into the lair. Her elbows are crushed painfully together and bound in thin leather cords. The thin leather bites deep into the soft flesh above her elbows as her hands flail around uselessly behind her. She demands to be freed immediately and threatens the Hunter if he doesn’t release her. He tells her that she isn’t going anywhere and opens her satin blouse and gropes and fondle her tits. Annabelle is really pissed now and curses and struggles to get away. But he is too strong and she can’t break free. He reaches into his pocket and pulls out an old rag. Annabelle is incredulous as he the rag deep into her mouth and then pulls some elasitic wrap between her teeth and wraps it tightly around and around her head, sealing the rag deep in her mouth. Silenced but still defiant she stomps her feet and protests into her gag as he binds her slender wrists tightly together with more of the thin leather cords. He then pulls a chain down from an overhead pulley and attaches the end of the chain to the leather cords pinning her elbows together. He leaves her struggling helplessly at the end of the chain, twisting and turning in a desperate attempt to free herself. But the leather cords hold firm and when the Hunter returns Annabelle is still helplessly bound and just as defiant. He then opens her blouse completely and pulls her skirt down her long lean legs and leaves her standing bound in her panties, hose and stockings. Another cord is tied around her tiny waist and then pulled down between her legs. Annabelle protests in disgust into her gag as the thin cord is pulled deep into her pussy, stuffing her satin panties deep into her cunt. The cord is feed between her bound wrists then pulled back down her ass and up between her pussy lips again before being tied off at her belly. Annabelle is none too happy with her treatment and he seems to get great amusement over her . Then to her horror he begins to crank the winch on the wall and realizes that with her wrists tethered to the cord slicing her pussy in two that the higher he crankes her elbows the deeper the thin leather cords slices into her pussy. She scream, curses and cries into her gag as the cord violates her privates. He ties her ankles tightly together with more thin leather cord and then threatens to crank the winch even higher if she doesn’t apologize and for being such a cunt. Annabelle screams and cries in horror at the thought of the cord being driven deeper into her pussy. She begs and cries promising to be a good girl and apologizing into her gag. But the Hunter isn’t totally convinced of her change of heart. He leaves her hanging by her elbows with the cord between her pussy sawing itself deeper and deeper with every breath she takes. Finally he returns and she begs and pleads with her to release her elbows from the chain. He tells her that if she acts like a bitch again she will go right back up on the chain. He releases her elbows from the chain and then tosses her up onto his shoulder and carries her away for more of his nefarious entertainment. 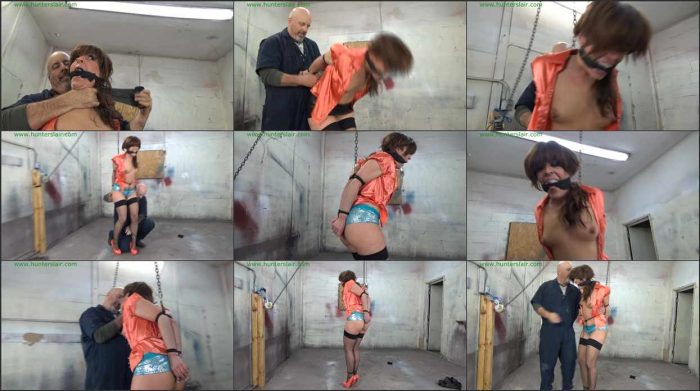 Autumn Bodell – Her arms twisted up in a cruel reverse prayer & left in the foul pit, jimhunterslair