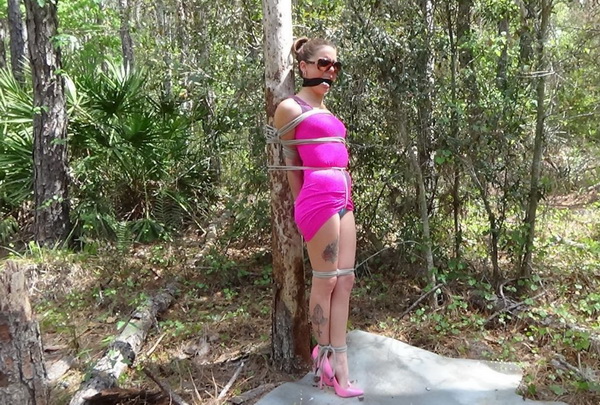 Petite party girl Michelle has been getting into a lot of trouble lately and is flunking out of college. So her family has hired the Hunter to keep an eye on her and prevent her from partying all hours of the night by any means necessary. Michelle has failed to heed his warning and tried to sneak out in a skin tight tank dress and stiletto heels. But unfortunately for her the Hunter caught her and has his hand. He decided that she needed to be taught a lesson and to scare her straight. He has brought her deep into the woods and tied her to a tree. Her arms are fused together behind her back in ropes with her elbows slammed up tight against each other and her wrists tightly bound. Ropes circle her shoulders and chest pinning her tightly against the tree with her poor arms trapped between her back and the tree. He pulls out an old rag and as she begs and pleads with him, promising to be good he stuffs the rag deep in her mouth and then pulls out a roll of black elastic bandage and pulling it between her lips he seals her gag in tight. Her ankles are then crossed and tightly tied together. He then ties a rope around her tiny waist and pulls the rope down between her legs then splitting her pussy in two the rope is buried deep in her panties. The end of the crotch rope is then run between her bound wrists then back down between her legs and tied off at her belly. He shows her that he still has piles of rope left and threatens to tie it all onto her helpless body. Michelle sobs and cries into her gag as he ties her knees tightly together. The Hunter checks the knots and sees the the naughty coed isn’t going anywhere and can barely move. He tells her that he is going to go but will return in a couple of hours to check on her and to see if she has learned her lesson. Michelle screams and cries into her gag as she watches him walk off into the woods leaving her bound, gagged and totally helpless. She can already hear the sounds of critters crawling in the under brush and the buzzing of flying insects ready to feast on her helpless body. 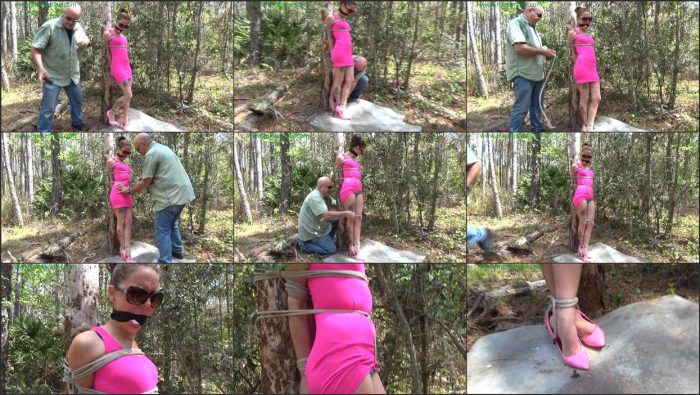