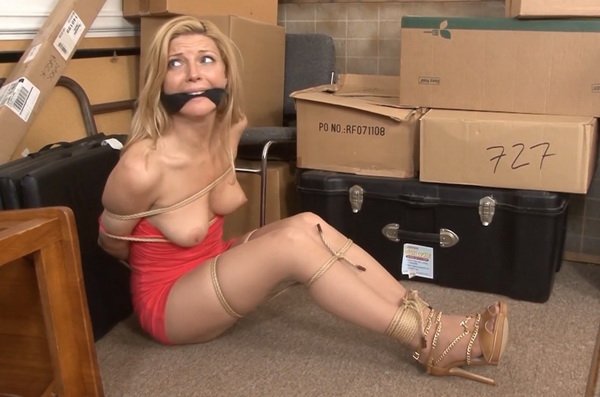 Now this sensational video is bargain priced! As our story begins, actress Niki Lee Young (in tank top, miniskirt and knee socks) is nabbed on the studio lot and spirited to a disused wardrobe warehouse. She’s tied up in a classic position (in an homage to a famous Detective magazine cover), “detective-gagged” and her captor accuses the sexy blonde of carefully choosing roles where she’s the bound and gagged damsel in distress… and he’s got the proof to back up his allegations.
Captive actress Niki Lee Young is shown highlights and outtakes from her career as a frequent “damsel of the week.” In the prime-time soap opera “California Empire,” the gorgeous blonde portrays “Candy Lynn.” The trailer-trash seductress is tricked into getting bound and gagged in her lingerie by her boyfriend as part of his plot. When she tries to hop after him, she’s left hogtied and furious on the bed.
Then in the “Sergeant Honcho” episode “Besieged, ” policewoman Niki is taken hostage, handcuffed, cleavegagged and her ankles are tied. When she tries to escape, she’s tied with more rope and her perfect, natural breasts are exposed.
As sexy actress Niki Lee Young’s captivity continues, her crazed fan captor shows another example of the gorgeous blonde playing the damsel in distress. In the “Sergeant Honcho” episode “Escort,” undercover policewoman Niki is caught and taken to a warehouse. She’s tied up and gagged (all shown on-screen), and menaced by her captors. When the captive cop squirms too much, more rope is added and the top of her pink minidress is pulled down to reveal her amazing breasts. Then the villains leave our damsel to the questionable mercies of terrifying reptile.
The main story is followed by “The Wrong Damsel.” Alexis Taylor plays ordinary secretary Emma Clapsaddle. The unfortunate office worker has been nabbed and tied by villains who think she’s a secret government operative. She tries to tell them they’re mistaken, but she’s soon cleavegagged by her captors. As her captivity continues, she’s tied with more rope and her huge breasts are bared. But when she’s finally rescued, Emma’s story takes an interesting turn. 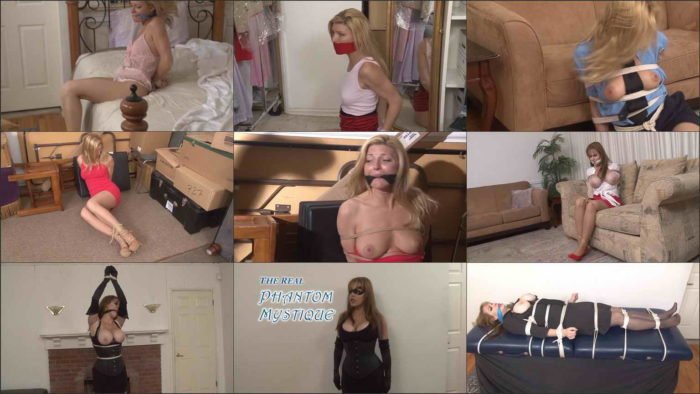