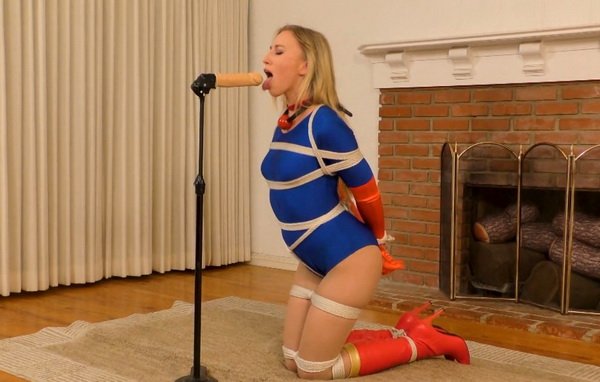 As the story opens, a desperate plea for help from a bound damsel (Agatha Delicious) is sent by way of a video message to the costumed crimebuster Freedom Woman (Riley Reyes). The champion of justice suits up in her pantyhose, leotard, boots, gloves, cape and mask, and then she tracks down the source of the video to a grungy hideout. She finds the gorgeous blonde (in short skirt, blouse, pantyhose and high heels) cleavegagged and chair-tied and she promptly frees her. But it’s all a trap, and the masked adventuress is attacked by two thugs. Freedom Woman easily wins the brief battle, but then the unsuspecting crimebuster is overpowered by the treacherous damsel she just rescued! The statuesque vixen instructs her black-clad henchmen to bind and detective-gag the reeling and powerless Freedom Woman (shown on-screen). Once the malevolent underlings have her helplessly trussed up, the subdued demigoddess is loaded into a car trunk for transport to a sinister undisclosed location.
Now in their clutches, Freedom Woman is tied standing, still recovering from her stunning defeat. Agatha Delicious (in black lingerie and thigh-high boots) enters to taunt her spandex-clad prisoner. The incredulous crimebuster can’t believe the evil woman would betray her in such a manner, but the booted babe assures her prisoner that it was all purely business. Agatha then gags poor Freedom Woman with silver duct tape and leaves her alone to struggle. The masked adventuress wriggles and writhes against her restraints, but all her efforts are useless against the tight ropes.
We next see Freedom Woman kneeling, securely bound and ballgagged. The defeated damsel drools helplessly down her chest, nervously waiting for the mysterious man who arranged for her to be taken. Soon the boss arrives, an influential criminal mastermind known only as “The Coach.” He removes our sexy protagonist’s belt, and then takes great pleasure as he relieves her of her mask — and her secret identity! The Coach removes his lovely damsel’s gag, and compels her to wrap her lips around a mounted dildo. The villain informs Freedom Woman that it’s no ordinary phallic device in her mouth, and it will transform her into a submissive bondage slave. Influenced by the diabolical toy, she can’t stop herself from sucking the dildo until the Coach ends the session. Will Freedom Woman ever be able to escape this dire fate? The story will be concluded soon!… 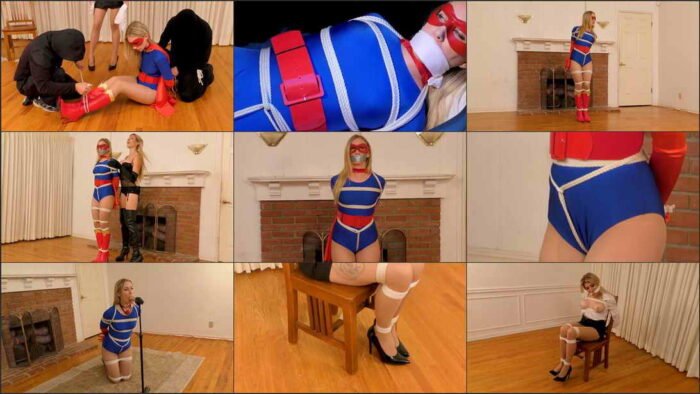