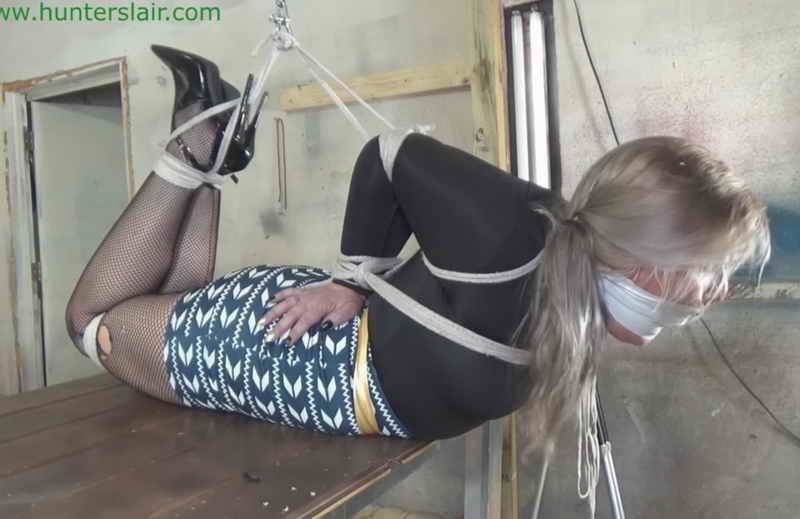 Pretty platinum blonde Whitney sits on the edge of the Hunter’s table tightly bound & gagged. Her elbows are slammed together behind her back with ropes wrapped around her biceps and wrists as not to allow any daylight between her forearms. Her curvy legs are fused together with more ropes cinched around her ankles and knees. Whitney’s mouth has been stuffed with an old rag and sealed shut with layers of shiny white tape. She twists and turns on the table pulling at the ropes in a desperate attempt to wriggle free. But there is no hope of loosening any of the ropes. The Hunter comes back with more rope and wraps it around her shoulders then runs it down her spine and pulls it up between her tightly bound wrists. Whitney grunts into her gag as her hands are jerked up by the rope until then are up to her shoulder blades. The Hunter wraps the rope around her chest and hands before cinching it between her wrists and spine. Whitney arms are now completely useless to her with her elbows jutting out and her wrists pinned to her spine. He rolls her over onto her belly and runs a rope from her elbows to her bound ankles. The rope is run through a chain hanging down from an overhead pulled to keep her from rolling over. Her stiletto heels are pulled up close to her bound elbows with the chain hookded between her heels and elbows. Whitney watches in horror as he goes over to her winch and presses the button. She can hear the whril of the electric motor engage and then feels the hogtie rope being pulled tighter and tigher by the chain. Whitney has to arch her back as the hogtie is pulled bowstring tight by the winch. The Hunter leaves her helplessly and hopelessly hogtied on the table knowing she has no chance of escape. He returns after a few minutes to spin her so that her chest and head hang off the side of the table before leaving her alone to suffer in the brutally tight bondage. 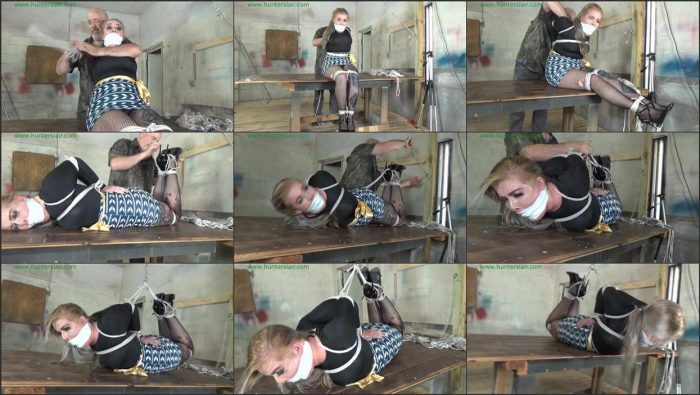 Lexi Lane Strictly tied over a table drill-do fucked from behind to orgasm, jimhunterslair