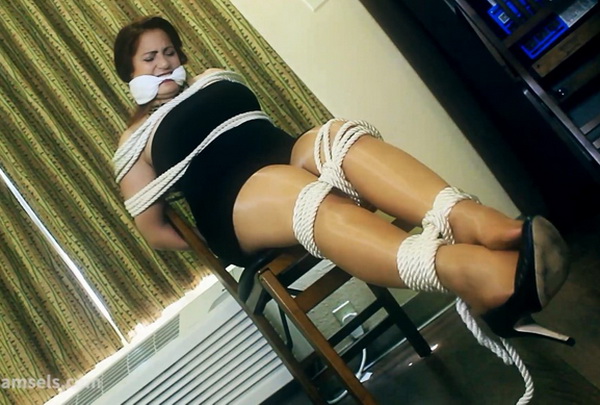 Vivian Ireene Pierce is a bad girl. She has been dating a rich man in hopes of robbing him blind. She has a man on the side and they have conspired to take his money in the good old fashioned way. They have decided to fake a kidnapping and will take the ransom money to start a new life together. The man is convinced it will work but in order for it to be realistic, Vivian must be tied up.
The sultry Vivian, clad in an evening gown, was set to go to a formal event, but now is in a seedy hotel, where her partner has her tied to a chair convincingly. Vivian is satisfied but her partner feels one more element needs to be added for realism… so he gets a white dish towel and soon Vivian is cleave gagged with the white cloth.
She asks how does she look all bound and gagged, and of course it’s Vivian, so it’s fantastic. She is set for the partner to take pictures to send to her rich boyfriend. However, her partner suddenly says that he has already sent a ransom request and it has been paid while she had been talking the whole time. He leaves her in the hotel room and runs off with the money, leaving Vivian alone to ponder why she decided to make such a shady deal in the first place.
This was a custom request from a fan. 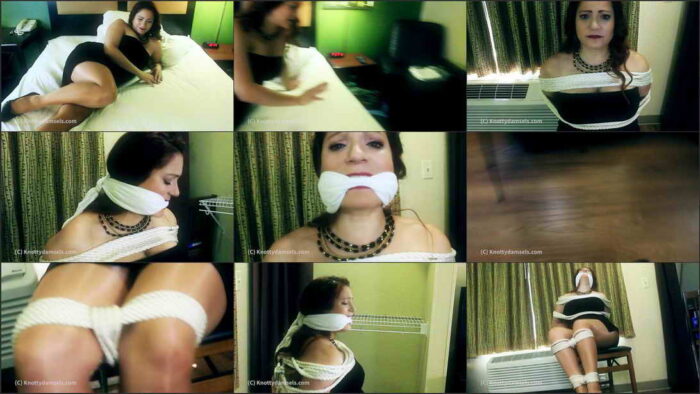