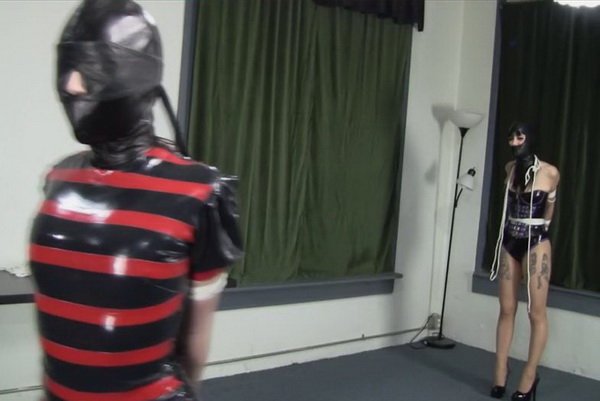 Ludella and Nyxon are both decked out in tight shiny latex waiting to be bound and gagged. Mr Big Boss wastes no time and heads straight to Nyxon binding her elbows tightly behind her back. Wind after wind of tight rope encircle her upper arms and finally Mr Big Boss decides to let them know the rules of the game they’ll be playing. Ludella is to be blindfolded along with her bondage and Nyxon is to be the quarry of the game with her being the one that is to be hunted. Sort of bondage Marco Polo. Both women are bound at the wrists and elbows before they’re to be gagged Ludella has her mouth stuffed with a large purple cloth with a microfoam wrap around her head. Nyxon suffers the same fate and the Mr Big Boss grabs leather hoods for both ladies. Ludella is then blindfolded and Nyxon is hobbled to make things somewhat fair.