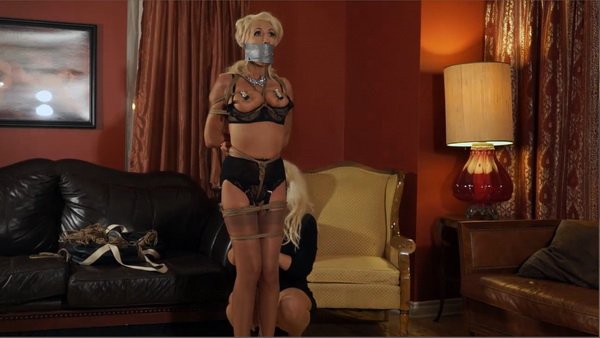 Amanda Fox is all done up. She gags and nipple clamps herself before walking into the living room to wait to be tied up. She is told to walk around in her very high heels. Duct tape is added to her gag. She is boxtied and man handled and her mouth is stuffed and black tape is wrapped around her head. She shimmies around a bit more all tied up with a crotch rope and then she is helped to the floor where she struggles. Her gag is removed and a harness gag is put on her head over a black stocking. She is hogtied and her toes are tied over her fully fashioned stockings. She still has those nipple clamps on which are now pulled up and attached to the rope above her chest. She looks incredibly sexy in my opinion! She also makes this look easy, which it is not.