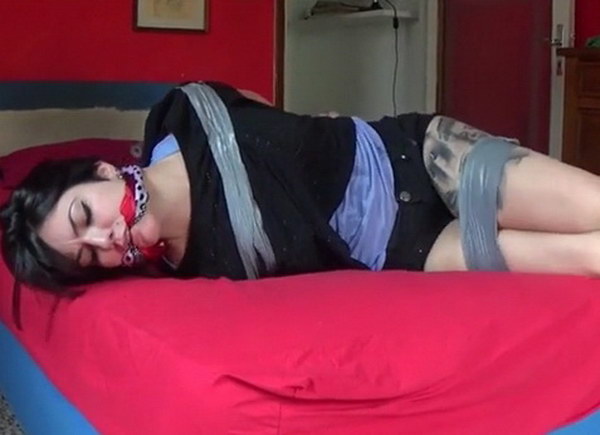 Adorable Holly think she’s home alone until she feel a hand clamped over her mouth. It’s a tattooed girl masked with a scarf who’s grabbed Holly and she’s here to rob her. The hand gagging female bandit lead Holly into the bedroom and push her down on the bed. She force Holly’s hands behind her back, tape up her wrists and then her ankles. Holly is being a very noisy damsel so the cunning burglar unmasks herself and uses her scarf to make Holly a nice and tight cleave gag. The girl is being very rough towards Holly and puts even more tape around Holly’s wriggling body to make escape impossible. Holly is left to struggle against her tight tape bondage while the female bandit goes searching her apartment for valuables… Our Mom Bound and Gagged The Babysitter

Briella Jaden and Ruby in: Bound For Slavery