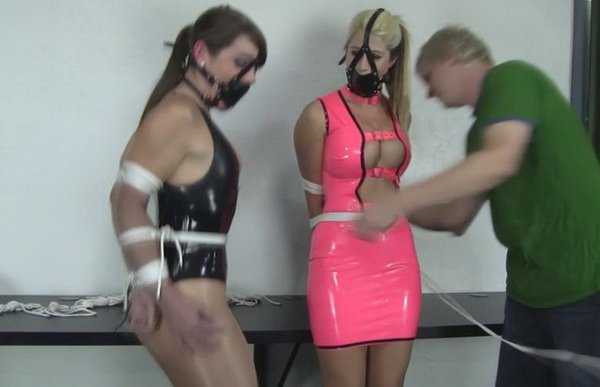 Elizabeth and Holly are both dressed in tight shiny latex and bout to be subjected to some nice tight bondage. Holly stroke’s Elizabeth’s hair while Mr Big Boss ropes her wrists off. Next her elbows are tightly tied together while Holly laments that poor Lizz is being tied that tightly. Finally Mr Big Boss moves on and starts binding Holly’s wrists and elbows tightly together also. Holly and Elizabeth manage to get some first class flirting in before Mr Big Boss straps a head harness panel gag into Elizabeth’s mouth. Holly is laughing at all the fun she’s having and Mr Big Boss takes that as an opportunity to stuff her mouth with another head harness panel gag…