Home » General » Tied up Holly Daze in the 8 minute escape 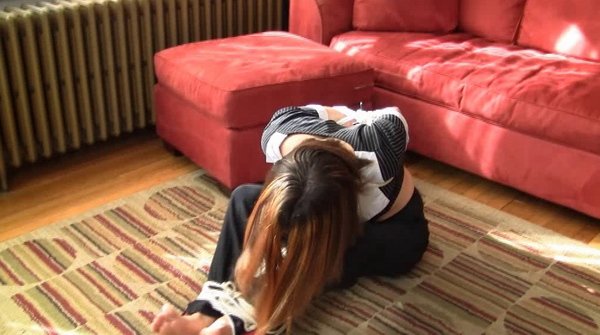 A girl is tied by Mr. Ogre in some manner. She is then given eight minutes to completely untie herself. During her attempt to escape, she is not allowed to damage herself in any way. If the girl is successful in her task to extricate herself from the bondage, she gets a prize and YOU get special bonus footage of another tie at the end of the clip. If she is unsuccessful, well…that is between her and Mr. Ogre…
Holley Daze is dressed in a black suit with red frilly heels. Her arms and elbows are tied behind her, anchored to her waist, and her ankles are bound together tightly in front of her. She almost immediately falls off of the couch and throws herself around and is genuinely trying desperately to get out of the ropes. It makes for a great show, for sure, but the real question is, does she escape? Watch and find out! Tied up GiGi Lynn in the 8 minute escape

Tied up Priscilla Pincushion in the 8 minute escape