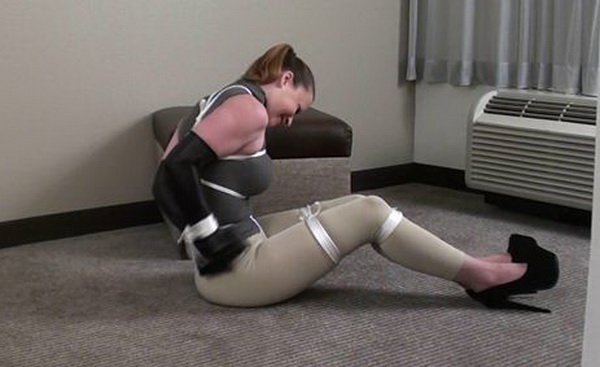 Serene is dressed in an incredible outfit that really shows off her tight, fantastic figure! Skyscraper platform high heels and black leather opera gloves finish off her sexy attire! Serene wears a cute ponytail for her capture and she looks just adorable tightly ballgagged! In Part-1, Serene is already partially bound tightly, she writhes and struggles to free herself but her attempts are hopeless…her captor appears and quickly pounces on her, tightly buckling a ballgag deeply into her cute little mouth! Then he sits back a prepares his ropes for Serene’s elbows, which he soon tightly binds together…rendering poor Serene helpless…she soon realizes that she has been captured to suffer and struggle for her cruel captor…this is just the start of Serene’s suffering and torment! In Part-2, Serene struggles and squirms…then I tightly bind her beautiful bare ankles together…deepening her feeling of helpless captivity! Ballgag, Tied in Heels Sylvia Bound in Over the Knee Boots HD