Home » new » The Tudors Part One: Presented and Enslaved at Court, restrainedelegance 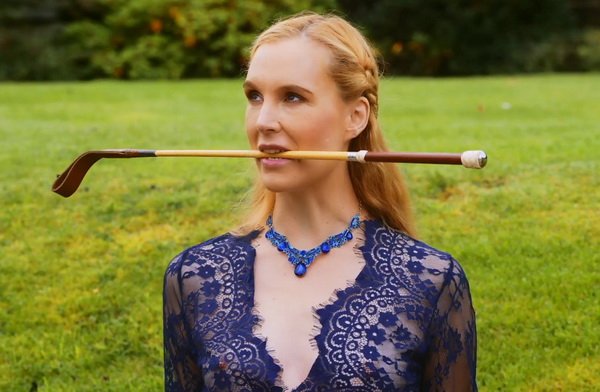 Three bright young new things are being presented at the court of Henry Tudor this season: innocent blue-eyed blonde Catherine Howard(Lucy Lauren), viviacious and whip-smart Anne Boleyn (Faye Taylor) and clever leggy temptress Catherine Parr(Ariel Anderssen) who has done her research and decided that maximum slutting is the way to go. The three stand in the reception line in the gardens of the royal court awaiting Henry’s pleasure. With him is his redheaded fire-brand wife Catherine of Aragon (Zoe Page). They tour the line and inspect each of the new girls with interest. Would they do as ladies-in-waiting? Possibly scullery maids? Or mistresses for the king’s bedchamber?
Catherine Howard flutters her pretty eyelashes and simpers at the King. He admires what he can see of her form through the formal restrictive gown she has chosen to wear… and decrees that the guards take her away and tie her up so he can use her later!
On to Anne Boleyn, whose gown could hardly be described as formal. She’s got quite a mouth on her and she cannot hold her tongue! She insults the queen until even Henry has had enough of her! Clapped in handcuffs she is also led away.
Catherine Parr is very much more ingratiating. She assures the Queen that she has no ambitions of her own… and the King she merely invites to look at her in her latest French fashions – an entirely see-through lace dress that leave very little to the imagination! The King bends her over and takes the riding crop to her proud arse right away, then forces the crop in between her legs! He gags her with the crop to he can have a more proper inspection. She claims to have gained many skills in the French court! The Queen advises the dungeon, but the King decides she needs to be trained as a maid in the scullery.
In to the kitchens with her! The Queen begins her training. She’s tied in rope on her knees in front of the Queen, and she explains how much it turns her on to be forced to submit to the highest of status people – man or woman! The Queen says she is going to break her… and sets to with her riding crop! She bares her fantastic arse, until the King comes in to help out, taking her over his knee as the Queen delivers a sound thrashing indeed! Then the King gags her and starts to explore her body…. 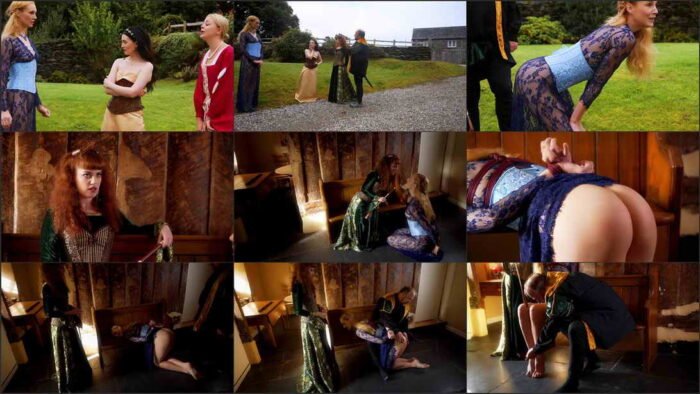