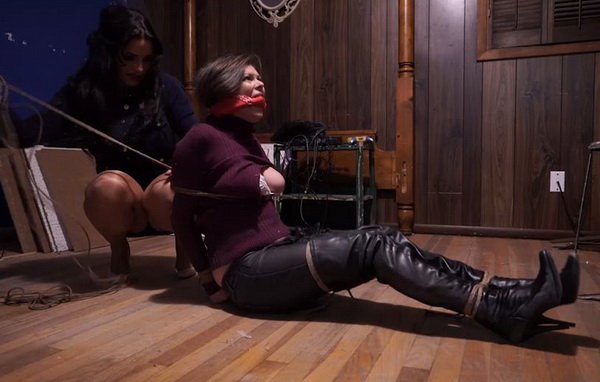 Riley’s lover is a married man. He doesn’t have a passcode on his phone. His wife thinks he is up to no good and she is correct. As him she texts with Riley asking her to come to a house that is being remodeled. He won’t be there of course- it is the angry wife. She knows the contractor working on it and promised to leave him a tied up slut. Riley wanders around calling Tony’s name. She is finally greeted by Tony’s wife, with an arm around her neck. She is soon out and she is dragged into the room. Her pretty hair picking up all the filth in this house. She is tied and taunted, her tits are cut from her sweater. She is warned to stay away from the man. She has been cleave gagged and eventually layers of tape are added to it. She is hogtied, he hands tied off to her waist. Her big natural boobs are exposed and her pants have been unzipped. She is now helpless until the contractor comes to find her tied up and helpless. Sexy booted bartender tricked into bondage before being robbed

The tables get turned on the bounty hunter Riley Rose