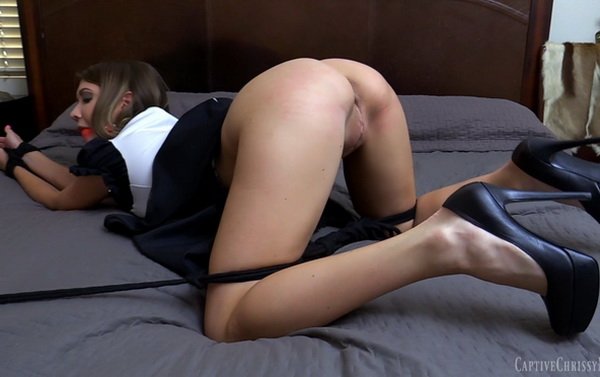 Maid Chrissy is dusting around the bedroom when she finds something interesting…. some sort of massager. Out of curiosity she plugs it in and turns it on. Immediately she can feel how powerful the vibrations are. She runs it over her body and eventually down between her legs. She obviously likes the way it feels there and moves to the bed to continue pleasuring herself. Her moans are growing louder and louder as she gets closer to orgasm… so loud that she doesn’t hear her boss come home. He walks into the bedroom and catches her masturbating on his bed. He tells her she is supposed to be cleaning and this isn’t the first time she’s slacked off so now he’s going to have to fire her! Maid Chrissy begs him not to fire her, she really needs the job and will do anything not to lose it! After taking a second to think about he agrees not to fire her but she will have to punished for her behavior! He grabs Chrissy by the hair and throws her down on the bed. Next thing we see Chrissy has been tied to the bed with her head face down and her ass up in the air… her arms stretched out and secured in front of her and her legs bound spread. A very vulnerable, exposed and humiliating position. She is also ballgagged. He starts by spanking her then he humiliates her even further by sticking his finger in her exposed asshole. She doesn’t enjoy this very much as she wiggles and squirms in her bonds. Then he inserts a jeweled plug into her ass for some added decoration. Next comes some hard pussy slapping… then he gets another idea that will really teach the naughty maid a lesson… 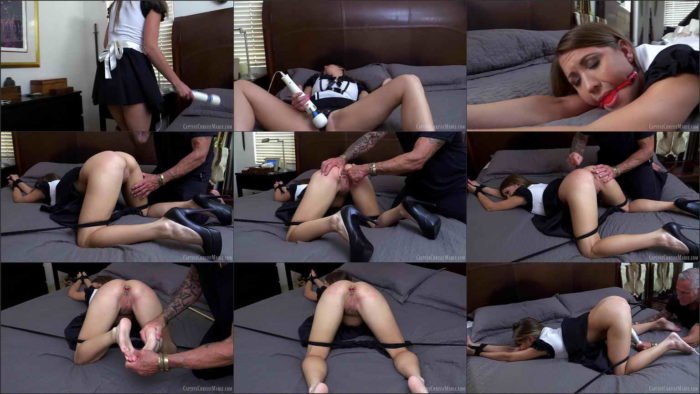