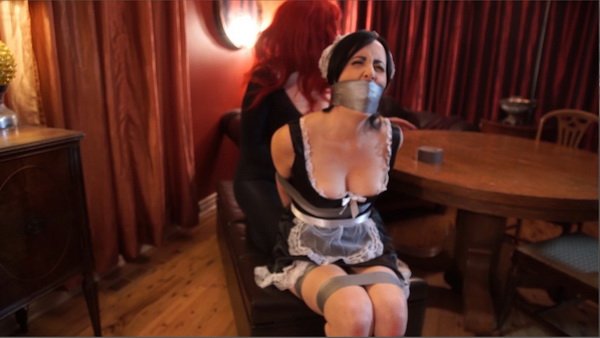 Dixie is an unsuspecting maid, just doing her job cleaning the house until a woman comes up behind her, puts her hand over Dixie’s mouth and threatens her to do as she says. The woman forces the maid to take off her panties and shove them in her mouth and then to wrap duct tape around her own mouth. Now that Dixie is quiet, the woman starts to apply tape to tightly bind Dixie’s wrists, her long boot covered legs and chest. She forces the maid onto her knees on the floor and leaves the maid to struggle on the hard floor.When the woman returns, she tapes Dixie’s arms to her body then puts the maid into a very strenuous hog tie.wrapping tape around her mouth, further sealing the panties in her mouth, and connecting her gag to her ankles. The maid can barely move as she whimpers and cries at the woman. The woman admires her handy work before blindfolding the maid and leaving her there for the owners to find. Shady strip club owner uses force to convince a customer favorite (and her roommate) to come back to the club!

Fined For Speeding, captured & tied up

Amanda Marie Handcuffed and Hogtaped, Tape Bondage, she Fell for it

Adara Jordin and Fayth On Fire taped, hogtied – The maid saw too much