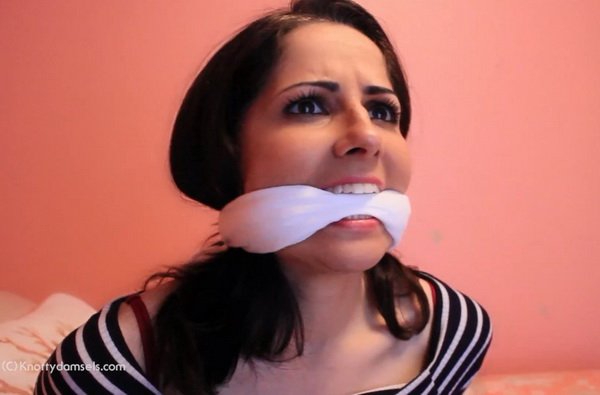 Hannah Perez is one of the most popular fetish models today, and her site hannahperez.net is amongst the highest rated. It’s easy to see why as Hannah is the perfect girl next door with movie star features that make her quite an alluring damsel. This collection proves it with 5 sets of Hannah at her damsel finest.
First off, a short vignette where Hannah is dressed in casual black, and finds herself bound and OTM gagged with a white cloth. After some struggling, she manages to remove her gag, spitting out a large wad of stuffing packed in her mouth. However, her captor returns and switches from cloth to tape. A strip of duct tape now silencing her, the captor makes plans on what to do with her and decides to leave her bound and gagged. The fiesty Hannah manages to get free and escapes her captivity.
Next up, cat burglar Hannah has made the mistake of breaking into the wrong house and is grabbed from behind with such force she blacks out. When she comes to, her mask is removed and she is bound at the wrists and ankles. She is wrap gagged with microfoam tape. Her captor taunts her and tells her that he is going to move her to another location, much to her dismay.
Then, a business clad Hannah is heavily chair tied with hemp rope to a chair, hands in front, a detective taken captive, and is not happy to be in her situation. She mouths off to her captor, who responds by shoving a hanky in her mouth and OTM gagging her with a white cloth. He leaves her as he tries to hide any trail that can lead to him, and she struggles furiously in her chair. She manages to get the gag off but she has no idea where she is or if she can get the ropes off.
Finally, in one of my personal favorite videos, Hannah stars as a fugitive on the run who is caught by a bounty hunter. He has to wait until the next day to bring her in so he keeps her in his home for the night. However, Hannah is completely annoying and won’t leave him alone. In a bedroom, he handcuffs her hands behind and when she protests, he thinks cleave gagging her with a white towel will silence her, but it doesn’t. After she keeps making noise, the bounty hunter brings out the duct tape. He wraps several loops of tape over her mouth and heavily tapes her sweater wearing body. Hannah still can’t shut up as she even tries to sing through the tape. Finally the bounty hunter feels no reward is worth this punishment and just leaves her alone for the authorities to pick her up.
Enjoy the Best Of Hannah Perez in this fabulous collection. 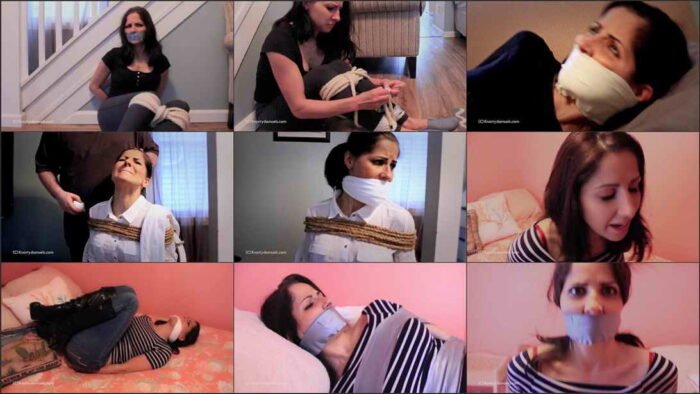 The Best of Kobe Lee, knottydamsels

Hannah Perez, Now I have to dress like a slut and let him tie me up