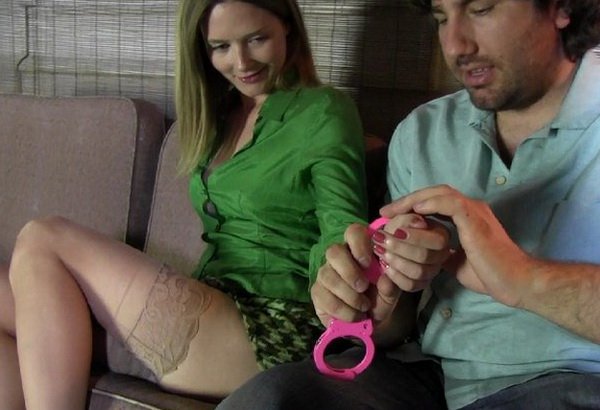 A married man and the babysitter of his kids sit on a sofa. His wife is out of town until tomorrow. He whips out a pair of handcuffs and ballgag and starts to tie her up after he makes sure the kids are staying over with friends. Unfortunately for him his wife comes in. He tries to say that he came home to Star tied up and that the kids did it and they need to be punished. The woman doesn’t believe him. She tosses a pair of panties at them and she demands that he gets out of the house. He leaves as she slaps him and the wife begins to add more rope to the babysitter. Then she removes the ballgag and stuffs pair of thongs in her mouth and wraps her head tightly with duct tape before pulling off her little plaid skirt and having her get to the floor where she puts Star into a hogtie and uses another pair of panties to put over her head. She ties those on with rope, leaving the girl there. Eventually the husband comes home and starts to untie her. He’s excited that the two can finally be together but she is angry and says that the second pair of panties aren’t hers… Tie me up in Auntie’s girdle

Mitzi Lamore hogtied – Much rope on the bed – I love bondage

Ayla Aysel Ballgagged and Tied in a Turtleneck, Jeans and High Heeled Sandals!